So short, so sweet, so alliterative. But when it comes to classroom implementation, Common Core is anything but simple.

What's so controversial about this set of universal standards meant to guide instruction in math, literacy, and language arts? Is it an authoritarian decree bound to destroy students' ability to think and teachers' autonomy in the classroom? Or a way to get every single student in America on track to the Ivies? 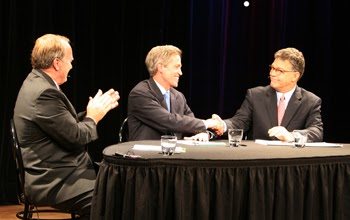 "Yes, we agree on the Common Core"...said no one ever.

As you might guess: depends who you ask. Whether it's a function of getting pouty when the federal government tries to tell us what to do, or the fact that the news has always got something to say and it's usually not nice, Common Core is a lot like that porcupine who had really good intentions of cuddling friendlily but then it stuck you once too often so now it's curled up in the middle of the road trying to avoid ongoing traffic.

And let's just say there's a tornado going on, too.

Get the metaphor? Basically, everyone's got something to say about this thing. Parents are upset, politicians are upset, and teachers, administrators, and students are caught in the middle.

Don't believe us? Take a peek at this NBC News clip, which doesn't err on the side of trying to see the silver lining.

That clip targets Common Core's math requirements, but in case you're aching for a bigger brouhaha from the naysayers, well, head on over to this analysis of the cons, which argues that Common Core suffocates teacher creativity, hinders state-specific education policy, and makes too many demands of local administrators and teachers. Especially since teacher evaluations are sometimes based on student performance on tests based on those standards.

But hey, would we be here if there weren't another way to look at it?

Nope. Here goes: according to the Common Core State Standards Initiative site, that spiky dude can be convinced to withdraw his quills. In other words: the purpose of Common Core is to provide students with a rigorous education to meet the educational and work demands they will face beyond their K-12 education. And that is, ahem, a good thing.

Additionally, according to the Common Core site, 43 states have adopted the standards. They were built upon a foundation that includes matrices for international and state standards, after all. That means they're not just an evil imposition on teachers everywhere. They're meant to be adaptable.

Basically, Common Core does not provide teachers with curriculum, just objectives to meet in class. So when people complain about how something is being taught, it is unlikely to come straight from the Common Core Standards themselves.

Sure, there could be a link. But let's not go pointing fingers without getting all the dirt.

So what's the Bottom Line? Should we scrunch up our faces in fury every time Common Core is mentioned? Or grin big because there's this genius way to keep our kids on track, and the poor fellow (um, list of standards) just gets a bad rap?

Well, we all know that's a question without an answer.

Admittedly, teachers and administrators are caught in the middle with Common Core, and some of them don't like these standards and never will. But we've got to deal with them on a daily basis. Teachers across America are still creating solid curricula that meet and exceed Common Core standards. Sometimes this happens because of Common Core and sometimes, let's be real, in spite of it.

Education, and pretty much any and every attempt to universalize it in this or that way, will probably always be a hot-button topic. And as long as we have to ask, "Is our children learning?" folks will debate about how to answer (or better yet, rephrase) that question.