As depressing as it seems, all animals will eventually die. Well, unless we find a way to turn them into immortal robot creatures, but let's assume that day is still far off. In order for a species to survive, it must replace these dying animals. The replacements are created through reproduction.

We don't fully understand this instinct, but almost every animal on the planet feels the urge to reproduce at some point in their lives. It's hard-wired into their brain so strongly that many animals will make all kinds of sacrifices to ensure that they have offspring AND that these offspring survive. Some octopi have been known to give up texting for a whole week. Kidding. They always have a phone in one of their arms.

Since offspring inherit the genes of their parent or parents, this type of sacrifice doesn't just help the species continue, but allows the genes of the parents to continue. It's the only road to immortality; plus, passing on genes lays the foundation for natural selection.

Parental sacrifices can occur before reproduction, during the act itself, or after reproduction. It might be a physical sacrifice, like being pregnant or having to regurgitate your lunch to feed your tweeting offspring. Pregnancy requires lots of energy, and it can make animals slower and put them at risk to predators. For some animals, it might mean a fight to the death over a mate. Other times, a male might sacrifice himself after mating.

Nothing like winning the battle for the female's affection just to become her dinner. As brutal as it sounds, this provides the female with extra nutrition for her pregnancy so that she produces the best possible offspring. Check out this video of a female preying mantis snacking on her mate.

Think that's harsh? Sometimes it's the mom that sacrifices herself to be eaten by her babies. The practice of matriphagy (from the Latin matr for "mother" and the Greek phag for "to eat.") is when the mother becomes her offspring's first meal. For example, within a week of giving birth, the spider Amaurobius ferox allows her newly hatched babies to gobble her up. This hearty meal starts them off in great health. 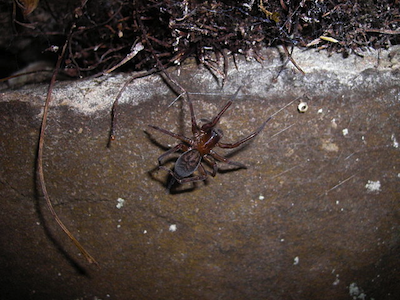 The key to understanding reproduction is basic genetics. All animals have a genome made of DNA, which is like a blueprint of the animal. The genome is tightly packaged in the nucleus of animals into wormlike segments called chromosomes. 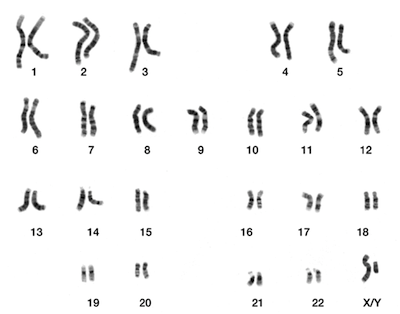 These wormy little chromosomes contain all the blueprints to make someone just like you (if you happen to be male (since it's missing a second X chromosome)). Image from here.

Each chromosome contains smaller segments of DNA known as genes. Genes come in different flavors, or alleles. Blue and brown are two alleles of the eye color gene. Different alleles are the cause of diversity among animal populations (including humans).

Most animals have diploid cells, and some animals have even more "ploids" than that. Polyploidy is rare in mammals, and usually spells death for the organism. Fish, amphibians, and lots of invertebrates are polyploidy, though. One genus of frogs, called the claw frogs, are dodecaploid and have 12 copies of each chromosome. Humans have 23 different chromosomes, but, since they are diploid, they have two copies of each for a grand total of 46 chromosomes.

Anyhow, for successful reproduction, a new animal must be created with the correct number of chromosomes. Different animals have different numbers of chromosomes, but the goal is always the same: to produce an animal with the same number as the previous generation.

The Basics of Reproduction

Asexual reproduction is a one-player game. There's only one parent and that parent passes on an identical copy of its entire genome. It's essentially creating an identical clone of itself (unless a mutation occurs).

Asexual reproduction is rare in animals, although some animals that use it can also reproduce sexually as well. It just depends on the situation they're in.

It's fairly simple to ensure offspring get the right number of chromosomes when the parent just breaks off a cell to make a new organism. The only question is: which cells will become the offspring?

Here are a few ways that offspring can be created asexually: 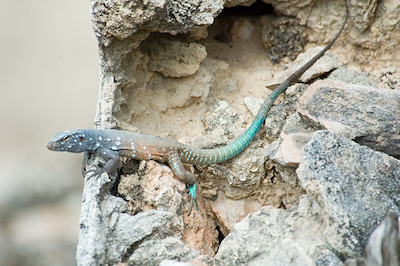 Stay away male whiptail lizards, this lady doesn't need you at all. Image from here.

Sexual reproduction is a two-player game, and every animal needs a partner, or mate. The two parents will each pass on part of their genome to the offspring. It'll then have a genome that is a combo of both parents.

As you can imagine, this makes it slightly more complicated to produce offspring with the same number of chromosomes as the parents. If two diploid parental cells were to combine, then the offspring would have twice the regular number of chromosomes. Yikers. To avoid creating accidental polyploidy, the parents create special haploid sex cells, called gametes. The male gamete is a sperm and the female gamete is an egg.

When the haploid sperm and the haploid egg combine (at the moment called fertilization) they create a diploid offspring cell. Bingo. Problem solved. Sounds simple, right? Well, there's actually a lot of work that has to happen to bring these gametes together.

First, production of the gametes is a complex process. Then, there's the well-known trouble of finding a partner to share gametes with. Finally, the act of mating and introducing the gametes together can be a tricky process, and there's two ways to do it (which we'll discuss in detail later):

Each type of reproduction has advantages and disadvantages. Animals that reproduce asexually don't have to expend energy to find a mate, and if they're sessile organisms, they don't have to suddenly sprout legs to check out the gene pool. The downside is they can't exchange genetic material with other members of their species. And that's a HUGE downside.

Sexual reproduction allows for combining genes in different ways, which helps the best and most useful strengths of the species persist in the population. Two parents can create a variety of different offspring that makes the population more diverse. Diversity helps protect the species from things like environmental changes, diseases, and predators.

Larger animals usually have fewer offspring than smaller animals. That's because it takes more energy and more time to produce large offspring. We don't have exact numbers, but think about it this way: one baby elephant costs as much energy as about a gazillion cockroaches. Insects and other tiny things often have many offspring because they put less energy into each individual.

The hydra is an animal known for its regeneration. In fact, it seems like it can regenerate forever. That's why scientists are using hydras to study the aging process.