Species have been breaking it off with their ancestors for years. When a new species, or "kind" is formed from an existing species, its termed speciation. Remember that species are defined by their reproductive isolation, or inability to reproduce with any other species. Speciation should not come as a surprise to anyone. Everyone saw that breakup coming.

Millions of years of macroevolution and mechanisms of selection (mutations, gene flow, genetic drift, sexual selection, and natural selection) marinating with the heat of a few really big disagreements over what color to paint the living room walls have amounted to the day when a few members of a species call it quits and decide to move on. Gradualism is simply the concept that, although inevitable, these things just take time.

The evolution of species is often depicted as a tree, where different life forms gradually branched out from common ancestors to form their own species.

There are two main types of speciation: allopatric and sympatric.

Most often, breakups in species occur because of a long distance separation. You know, "I just need to spread my wings. Make new friends. See the world!"

When one group of a species is physically separated from another group of its species by some geographical barrier, it's possible for each species to individually adapt to its environment. This is known as allopatric speciation. As selection occurs for the best traits suited for different location, the two populations can become distinct species.

This was the case for Darwin's famous Galapagos finches. Flying from South America, over 1,000 miles from their Ecuadorian ancestors, these finches evolved into at least 14 different species among the various islands. Some finches evolved large beaks to gnaw on large seeds with hard shells. Others were selected for long, thin beaks able to dig into trees for insects. Each bird was not only different from the mainland species; they were also different from each other. We're guessing these island birds enjoyed their new vacation getaway home so much, they also evolved an ability to let their feathers down and relax on the beach. 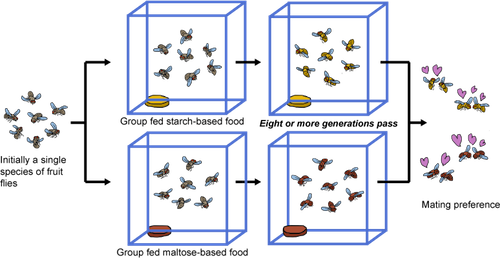 In this experiment, flies have been physically separated and fed a diet of either starch-based food or maltose-based food. After several generations, these flies show a mating preference for other flies who like the same food. Due to their physical separation, they may be on their way to allopatric speciation. If this same preference occurred without the species ever being physically separated, it might lead to sympatric speciation.

A less common type of divergence is called sympatric speciation, which occurs without geographic separation. This is a breakup that occurs even though the individuals have the same groups of friends and frequent the same hangouts. This situation is obviously a little more difficult.

One way that sympatric speciation might occur is when there's been disruptive selection on a population. When two extremes of a phenotype are favored, such as different food sources, speciation can happen as the population adapts to different preferences.

Another example of sympatric speciation occurs when organisms become polyploid, or gain a few extra sets of chromosomes. Meiosis, which forms gametes, divides a diploid cell into four haploid daughter cells. Occasionally, mistakes occur and gametes might end up with an extra set of chromosomes. In this case, they'd be diploid just like the adult cell. If one diploid cell combined with another diploid cell, the resulting fertilized egg would be a tetraploid (4n) with four copies of chromosomes.

Sometimes polyploidy is lethal, but sometimes polyploids can reproduce. If polyploids continue to survive with extra chromosomes and extra gene copies, evolution begins to take place. Cells don't need extra backup DNA. "Extra" copies of genes evolve into new genes with new protein functions. Eventually, a new species evolves, too. It's like a species went out on its own, got a few new hobbies, and now it's ready to roll on its own, playing "I Will Survive" full-blast on its iPod.

These "whole genome duplications" are rare, but important. In fact, many organisms from yeast to humans have gone through duplication events to get to where they are today.


Polyploidy, resulting from the combination of gametes with more than one copy of chromosomes, can lead to sympatric speciation. Here, a diploid that makes diploid (2n) gametes rather than haploid (n) gametes, can end up with a tetraploid (4n) zygote.

Tetraploids (4n), adults that try to reproduce with diploid members of their own species usually notice some difficulty producing viable offspring. If they mate, their offspring will be triploid, having two copies of chromosomes from the tetraploid parent and one copy of chromosomes from the diploid parent. The buck usually stops here. Triploids often don't survive. If they do, they are usually sterile. The only way that tetraploid individuals can reproduce effectively is to self-fertilize (such as in some plants), or to mate with other tetraploids. This reproductive isolation is another road to sympatric speciation. If you can't mate with all the members of your species, even though you hang out in the same place, then you might just become a different one.

A barrier like this one makes a giant American Ninja Warrior Warped Wall-like hurdle to reproductive success between two organisms. Polyploidy is an example of a postzygotic reproductive isolation barrier, which prevents the offspring of two different species from ever surviving or having offspring of its own. Even if a zygote is produced between a tetraploid and diploid organism, it might die as a zygote, or as an adult. If it survives to an adult, it won't reproduce.

Prezygotic reproductive isolation barriers prevent different species from producing offspring too, by not allowing fertilization in the first place. Mechanisms of prezygotic isolation include living in separate habitats, mating at different times of the day, and not recognizing different species' pick-up lines. Often, different species can't physically mate due to non-matching reproductive organs or gametes that are unable to fuse. Can a bird and a hamster be friends? Apparently. Can they make baby bisters or hamrds? We think not.

We get by with a little help from our friends.

Thankfully, speciation isn't all about breaking up. Although speciation is the divergence of two species from a common ancestor, we also know that two species can coevolve, or evolve together. Although parasites and hosts can coevolve, often these two species rely on each other in a symbiotic relationship. An example of this is the yucca moth and yucca flowers, who regularly karaoke a duet together. The yucca plant can only be pollinated by the yucca moth. The yucca moth enjoys eating the yucca plant and laying its offspring within its flowers. If one of these two species made a lifestyle change, the other would be sure to adapt. They're BFFs. 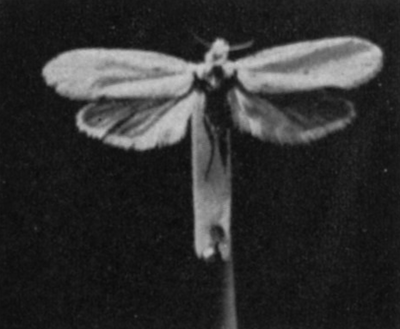 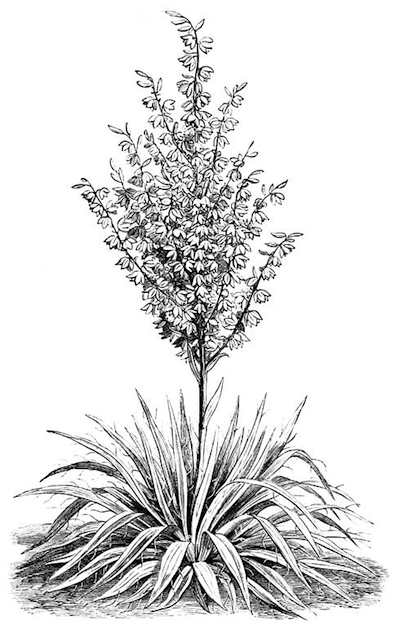 The yucca moth and the yucca plant have coevolved to fit each other's needs.

There are also times when species that have nothing to do with each other and possibly have never met each other end up evolving quite similar phenotypes. For example, the independent evolution of wings in flying insects and birds is a common example. The two types of animals aren't closely related, but they've got analogous appendages. This convergent evolution almost seems like a large coincidence, but it's not nearly as embarrassing as showing up to prom in the same dress.

Although adult birds and reptiles are very different, the early biologist Karl von Baer supposedly mixed up several vertebrate embryos by accident one day and was never able to tell them apart. Hey, it could happen to any of us. The important lesson to be learned here is that its further evidence of a common ancestor before speciation.