Plants are very different in the various habitats around the world. How does evolution favor certain traits in specific regions?
If you live in California and visit the Mediterranean, Chile, South Africa or Australia, you might notice similarities between the plant life. While species may not be exactly the same, plants might look very similar even on different continents. All of the places just mentioned have similar climates, so their plants share similarities that are adaptive in that climate. The separate evolution of similar traits is called convergent evolution. Convergent evolution happens when organisms that are not closely related end up with similar characteristics.

A great example of convergent evolution is cacti and euphorbias. Cacti live in the Americas and euphorbias live in Africa. Both groups are desert plants, with juicy-looking stems and scary spikes. Even though they look alike, cacti and euphorbias are not closely related. They have similar qualities because natural selection favored traits that were adaptive in desert environments.

Convergent evolution is why so many desert plants are succulent, with juicy looking stems. Succulence is an effective mechanism to deal with drought, so it has been favored in dry climates.

Agave is a type of plant that uses succulence to survive dry climates: 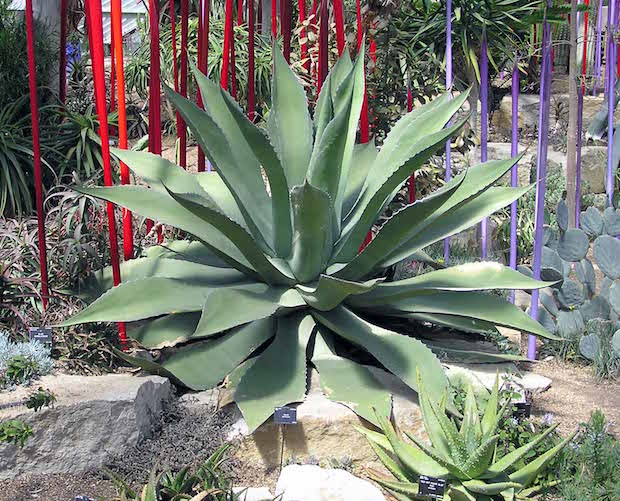 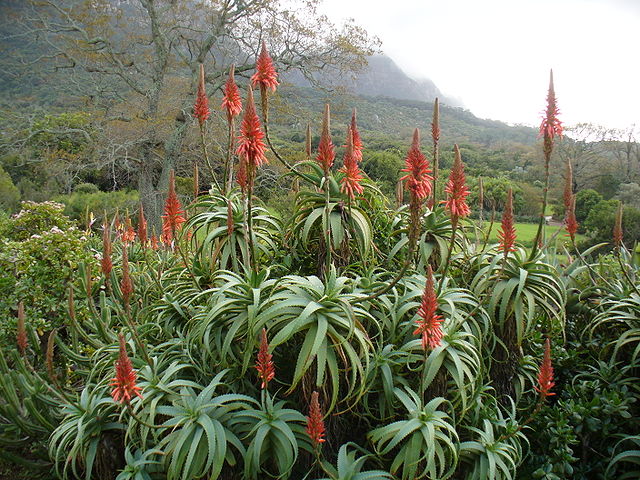 A different reason plants may be similar from one place to another is that they actually are closely related. For example, there are beech trees in Chile (South America) that are most closely related to beech trees in Australia and New Zealand. South America and Australia are separated by the enormous Pacific Ocean, and beech seeds can't tolerate seawater. So how did they get from one place to the other?

The answer is (drumroll, please)…continental drift. Continental drift is the phenomenon caused by plate tectonics that moves continents and oceans around every few million years. Australia and South America were probably once connected by a land bridge crossing Antarctica, when the continents were in different places than they are today. Now it's easier to understand how beech trees in South America and Australia are closely related to each other. They shared the same ancestor.

The Earth looked a lot different 200 million years ago. 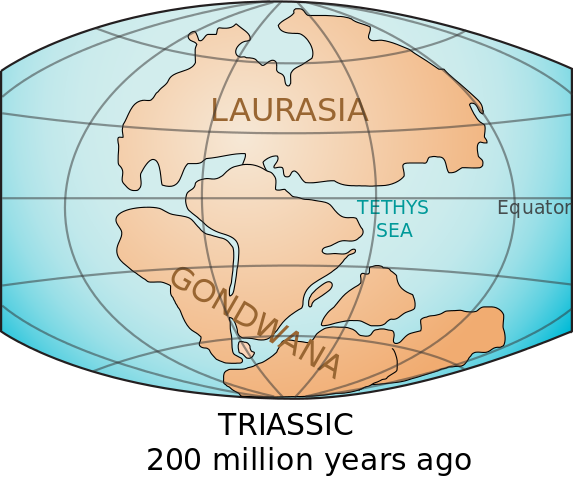 When an organism's ancestral range is divided by some geographic barrier, like a mountain, a river, or, in the case of the beeches, an ocean, it is called vicariance. Vicariance usually results in the species whose range was split diverging into two (or more) species.

Sometimes plants (and animals) evolve quickly and fill different niches in their communities. This is called an adaptive radiation and happened after the five mass extinction events in the Earth's history. This type of radiation does not cause superpowers, though. An adaptive radiation can also happen after a change in climate, or when organisms are isolated on different islands such as the Galapagos or the Hawaiian islands. Darwin's finches on the Galapagos are a classic example of an adaptive radiation: related finches evolved different beaks that allowed them to specialize on varying sizes of fruit and seeds. In Hawaii, a group of plants called the silversword all descended from one ancestor that lived on the islands 5 million years ago. Over time in their different environments, descendents of that one plant evolved into very different plants, some tall, some short, some round, some spiky.

The same plate tectonics that cause continents to shift also cause earthquakes. But don't worry, continents move very slowly.