Eventually, plants did begin to grow taller because they developed vascular systems. They did not have seeds therefore they are calledseedless vascular plants. It may not be the most creative name, but at least it is descriptive.

These days, the main group of modern seedless vascular plants is a well-known, well-loved group: ferns. There are other types of seedless vascular plants such as lycophytes and pterophytes, and we'll talk a little bit about them later. When we talk about early plant evolution, remember that the first plants that developed vascular systems are no longer alive. However, they gave rise to the current plant lineages.

The evolution of a vascular system meant that plants could grow taller. Plants that can grow taller than their neighboring plants have the advantage of getting more light and shading out the competition. The increase in plant height and increased competition for light and resources may have driven evolution of a diverse set of plants.

Roots: Roots are the main way a plant takes in nutrients from the soil. Of course, plants photosynthesize, using sunlight and carbon dioxide to make sugars, but they also need nutrients that the sun can't provide and they get those from the ground.

Leaves: Leaves are where the magic happens; that is, leaves are where photosynthesis happens. OK there aren't any rabbits being pulled out of hats, but turning sunlight into sugar is pretty close, isn't it? Bigger areas for photosynthesis means more energy capture for a plant, giving it a good chance of survival and reproduction.

Two of the phyla of seedless vascular plants(brace yourself for some weird names)are Lycophyta and Pterophyta..(If Pterophyta reminds you of pterodactyl, that's good because these plants were around when pterodactyls lived. )

The plants in the phylum Lycophyta are called lycophytes or lycopods. Modern lycophytes, the plants we call club mosses, don't inspire a whole lot of excitement for most people. They are small and get overlooked, although they do look like you might find them in a Dr. Seuss book:

Brain snack: The stagnant water in Carboniferous swamps prevented complete decay of the lycophytes and other early plants growing in them. Over millions of years, with lots of heat and pressure, the dead plant material from the Carboniferous became coal. These coal deposits are widespread and have been a main source of energy for humans since the Industrial Revolution.

The phylum Pterophyta includes ferns, horsetails, and whisk ferns. What the heck are those? Read on

Ferns are leafy plants, well actually they prefer to be called frondy plants. Their leaves are a very specific shape, and are called fronds. Ferns can grow really tall; some are even called tree ferns because they are as tall as trees, even though they aren't woody plants. 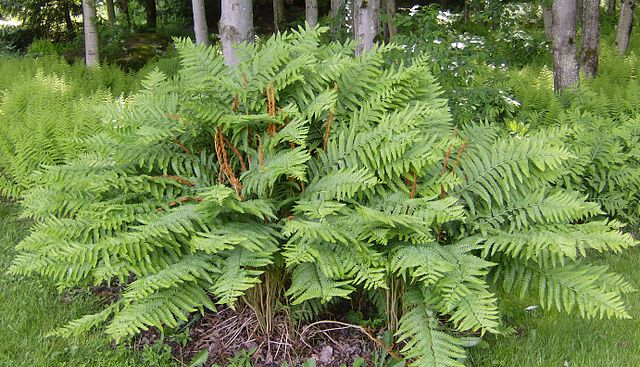 Like bryophytes, ferns also exhibit alternation of generations. (Do we need a catchy nickname for that or what? Alt Gen? AG? A-to-the-L-to-the-T-to-the oh never mind.)

Fern gametophytes have antheridia and archegonia, and just like bryophytes, the sperm need water to swim to the egg, so most ferns live in places with moist climates. Sometimes sperm fertilize eggs from the same individual plant, and sometimes they fertilize eggs from different neighboring plants. After fertilization, the zygote develops into a sporophyte.

Fern spores are found under the leaves of the fern plant, which are sporophylls, meaning spore-bearing leaf. Sporophylls might just be the Martha Stewart of the plant world—they keep their spores neatly organized in little attractive brown clusters called sori (singular = sorus). In the picture below, each brown dot is a group of thousands of tiny spores: 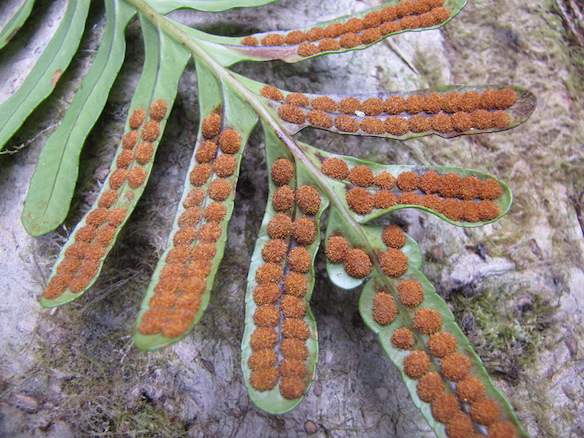 Fern spores hitch rides on the wind, or sometimes through water, to new places. Spores develop into haploid gametophytes. Fern gametophytes are tiny, heart-shaped and short-lived. They only live a few days but if an egg was successfully fertilized on the gametophyte, soon a sporophyte begins to grow on top of the gametophyte. Fern gametophytes don't have true roots, but instead are anchored using rhizoids. 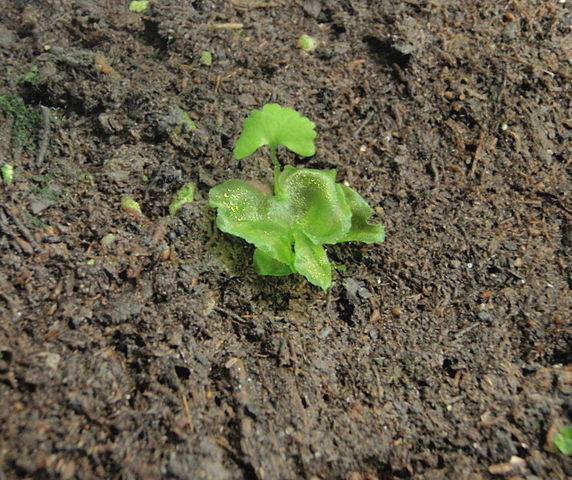 Frond leaves, or fronds, are valued for their nutritional benefits. Some people like to eat the new, unfurling leaves. The unfurling leaf is called a fiddlehead because it looks like a fiddle or violin scroll. 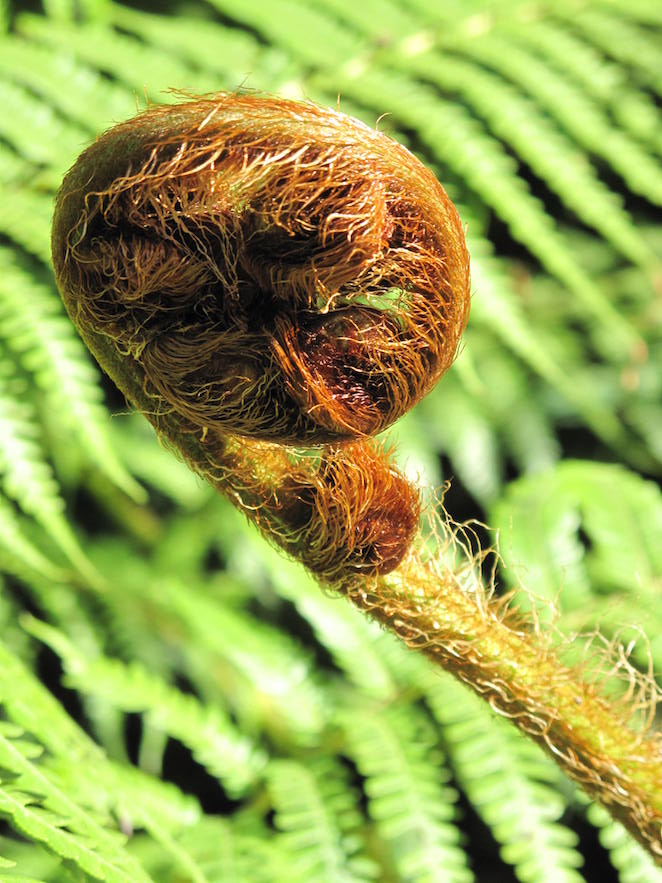 Another set of plants from the Pterophytes is the horsetails. Horsetails look like horse's tails. Well, as much as a plant can look like a horse's tail… 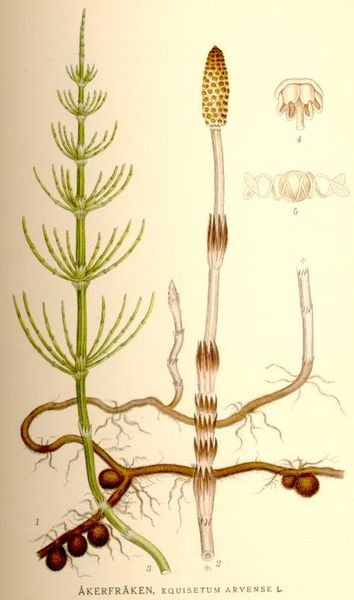 OK maybe the plant horsetails don't look like real horse's tails, but why would a horse's tail be sticking up from the ground anyway? Bristlebrush would probably be a more apt name. Horsetails, like lycophytes, were once widespread, and some species could be fifty feet tall. In modern times, we only have one genus of horsetails: Equisetum.

One more type of plant in the phylum Pterophyta is the whisk ferns. Whisk ferns are sort of funky because they are vascular plants but don't have roots. That's right, no roots.

One type of cell in the xylem is called a tracheid. Because of this, vascular plants are sometimes called tracheophytes.