Remember those early philosophers we talked about in the introduction? They're those snazzy thinkers whose curiosity about the world around them created the earliest ideas of science. Meet the Greek philosopher, Democritus. 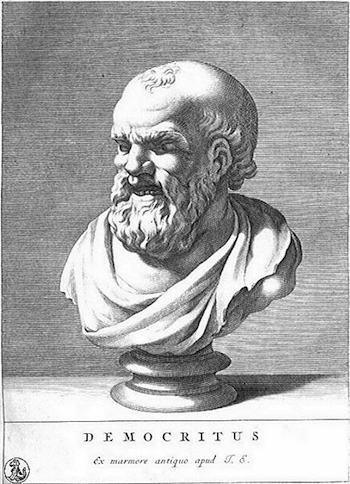 We heart this guy because he's the father of the Atomic Theory. This is crazy to think about, but over 2,400 years ago Democritus was sitting around Greece thinking about matter, which is anything that has mass and takes up volume.

While most of us sit around thinking about pop music, celebrity gossip, or the latest zombie or vampire movie, Democritus focused his thoughts on more serious matters. He asked himself, "Self? Do you think matter can be divided into smaller and smaller pieces forever? Or is there a limit to the number of times a piece of matter can be divided?" It's kind of like the age old mystery of how many times can you fold a piece of paper. C'mon you know you've tried it.

To Democritus, atoms were small, hard particles that were all made of the same material but were different shapes and sizes. Democritus' atoms were also infinite in number, always moving and capable of joining together. We call these collective ideas the Atomic Theory. Democritus' work was not accepted by many of his contemporaries like Plato and Aristotle. They thought he was absolutely bonkers.

One guy who did not think Democritus was crazy was John Dalton. He was an English scientist and school teacher living in the early 1800s. He modernized the early definitions of matter and formulated a precise definition of the indivisible building blocks that we call atoms. 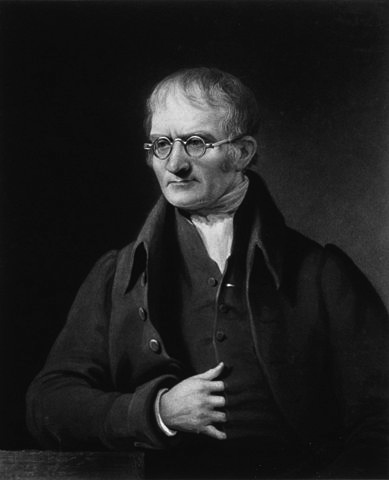 Dalton's theories are considered special and monumental. In fact, his work marks the beginning of the modern era of chemistry. In 1808, Dalton wrote a whole book about atomic theory called "A New System of Chemical Philosophy." Never fear as we have summarized the highlights of this piece of literature below. Here goes. 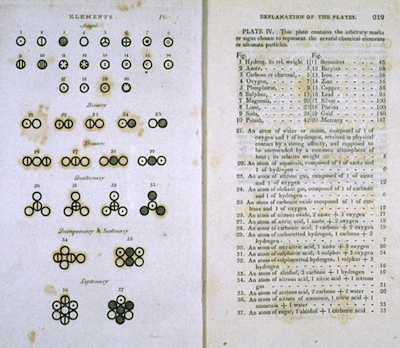 Dalton's concept of an atom was far more detailed than Democritus' and more importantly, it was based on experimental evidence. Interestingly, Dalton made no attempt to actually describe the structure or composition of the atom itself. That's because he really had no idea what an atom was like. Instead, he used his intellectual prowess to deduce that atoms of different elements such as carbon and hydrogen are not the same.

Reread point number three from our abbreviated summary of Dalton's book again. It is worth checking out. What is it really saying? It's saying that compounds are collections of atoms put together in very specific whole number ratios. For example, the compound water (H2O) is always a combination of one oxygen atom and two hydrogen atoms.

This idea is an extension of a law published in the late 1700s by Joseph Proust. His law was called the Law of Definite Proportions, sometimes it's called Proust's Law. It states that different samples of the same compound always contain the same elements in the same proportion by mass. In other words, all water is one oxygen atom and two hydrogen atoms no matter where it's found or collected.

This also brings to mind another important and similar law in chemistry, the Law of Multiple Proportions. According to this law, if two elements can combine to form more than one compound, the masses of one element that combine with a fixed mass of the other element are in ratios of small whole numbers. Say what?

Now let's check out the fourth point Dalton made. This fourth hypothesis is another way of stating the Law of Conservation of Mass. This says that matter can't be created or destroyed. Atoms aren't unchanged during a chemical reaction. If an atom with a specific mass exists before a reaction happens, it (and its mass) also exists after a reaction occurs. This means that during the course of a reaction, mass is also conserved.

Can you believe these guys that lived forever ago developed ideas and theories that we still use today? It's pretty wild.

Want to stay current on the latest and greatest science news? Check out Science Daily for up-to-date science happenings around the world.