Types of Bonds and Orbitals - Atomic Orbitals and Electron Configurations

All Types of Bonds and Orbitals

An atom needs to have 8 electrons in its outer shell in order to feel complete. This need is what drives atoms to bond with each other. That's why it's important to understand exactly what's going on in the electron cloud. This cloud is different from the electron "pool" which is reserved solely for metallic crystals and metallic bonding.

The electron cloud we're talking about is the place where electrons move around outside of the nucleus. Think of it as one big electron disco where all of the outer electrons are moving about and shaking their groove things. Electrons, however, have their own way of 'dancing' within the cloud.

The old way of thinking about electron movement in fixed orbits around the nucleus is incorrect. In other words, electrons are not like roller coasters moving along a stationary track. That is an old-fashioned idea we should throw out the window. Let's think of electron movement in terms of probability, or where the electrons are most likely to be found—it's like finding the odds of rolling a particular number with two dice. Unlike the old planetary model of the atom, this new quantum-mechanic model describes a less certain electron orientation.

This may get a little wordy, but trust us. It will make sense.

We sense some confusion. Fear not. Let's clear it all up with an example.

Keep reading. If you're confused, we promise you'll get it. There is a chart below to help ease the information once you've absorbed it all.

We can see the finish line on the horizon—one last quantum number to go. The fourth and final quantum number, also called the spin quantum number, is used to determine the "spin" direction of each electron in a particular orbital. We're not talking about records, baby. (Maybe that's why the Beatles were confused.) It is described by the symbol ms and can have a designated value of +1/2 or -1/2.

As stated by the Pauli exclusion principle, no two electrons in a single atom can have the same exact set of four quantum numbers—just like no one else has your same cell phone number. The first three quantum numbers can certainly be the same, but if so, the fourth must be different. The quantum numbers can be used as a road map to determine the exact location of each particular electron.

Pat yourself on the back; we just got through quantum numbers. Don't worry; anything with the word "quantum" in it gets our brains aching, too. Feel free to re-read this section. People take entire college courses to try to understand this stuff.

Now that we know all about quantum numbers, we'll be using this information to help us use shorthand to describe the arrangement of the electrons in an atom.

This notation is called electron configuration and will allow us to predict how an atom will react with other atoms and what types of compounds will be formed as a result. This condensed way of representing the pattern of electrons in an atom uses a sort of build-up pattern. The pattern starts by drawing out an energy level diagram (see below). 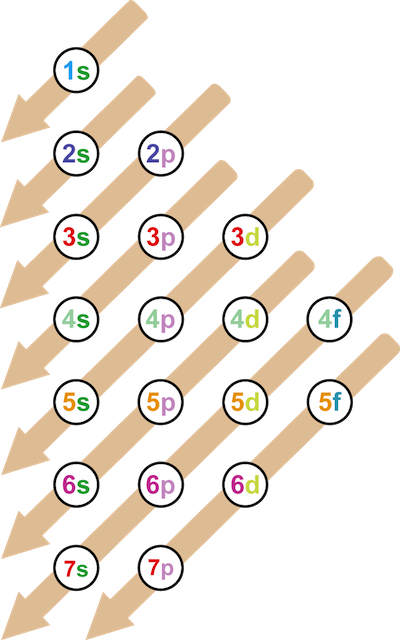 Each circle represents a subshell (l) in a given energy level. Notice that each energy level is color-coded. This is just to help orient you when filling out the energy level diagram. Aren't we just so helpful?

The above diagram simplifies how to fill in the electron configuration from lowest to highest. Notice the arrows first point to the little guy named 1s. Remember this corresponds to the n = 1, l = 1 state. It also happens to be the lowest energy configuration; that's why we fill it first. If we continue to follow the arrows we'll get a proper arrangement of states from low to high energy.

If you ever get stuck on an exam, feel free to draw out the above diagram. It's a quick and easy way to get a correct electron configuration.

Here is the electron configuration of hydrogen:

Since hydrogen only has one electron we only have to look at the first row to fill it in. The larger the number of electrons, the more rows we will need to use to fill out the electron configuration. 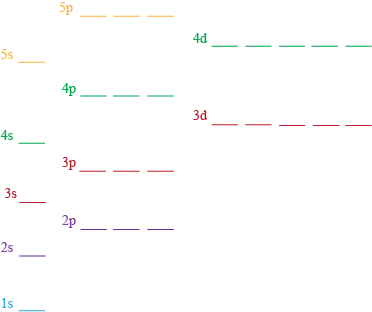 To do this, we must follow some rules when filling electron energy level diagrams. First of all, be sure to fill the lowest energy levels first as stated by the Aufbau prinicple. Also, remember to fill each orbital with a single electron before you start adding pairs as stated in Hund's rule.

In other words, every electron configuration will begin with 1s since it is the lowest energy level.

Just like siblings, electrons would much prefer a single room before they have to share a space with their little brother or sister. In other words, as in the case of oxygen with four 2p electrons, put the first three electrons into their own p orbital. Finally, you'll then have no choice but to pair up the fourth and final electron with a partner. 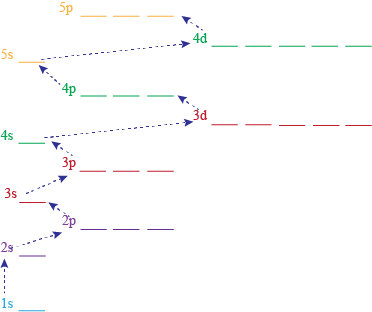 Let's fill out the energy level diagram for sulfur based on all these rules. Thankfully you won't have to use your nose. First, let's go to the periodic table and find how many electrons sulfur has. Again, it's a neutral atom so it will have the same number of electrons as protons. Since the atomic number is 16, the number of electrons is 16. That gives us sixteen arrows to place in the blank lines starting with the bottom row. 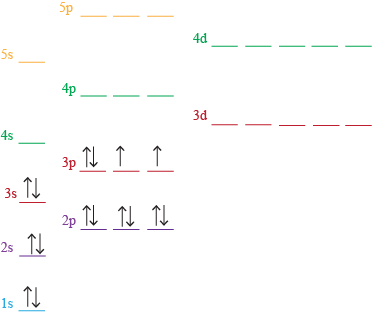 After looking at the energy level diagram, the electron configuration for sulfur would be written as:

Note: If we add up all the superscripts, we get the number of electrons in the atom (atomic number, Z, number of protons). For sulfur this would be 16. We can also tell from this notation and from the energy level diagram that sulfur needs 2 more electrons to complete its outer shell.

Can't get enough of this orbital madness? Dying to know what these orbitals really look like? Check out 3D representations of all the orbitals here or watch a video about orbitals here.