The Language of Chemists

We've already learned how and why elements combine to form different compounds. Now it's time to move on to bigger and better things. Let's learn about how to describe what happens when elements and compounds interact with one another to form new substances. Can you guess what we call these interactions? We'll give you a hint: It's chemical reactions. Oops—spoiler alert.

A chemical reaction occurs when one or more chemicals react to become different chemicals. This is not to be confused with processes like melting or freezing. Those processes are physical reactions (or physical changes). In chemical reactions, atoms rearrange, bonds are broken, new bonds are formed, and the chemical's identity is actually changed. It's basically the premise of the movie Face Off. Throughout this chapter, we'll talk about all types of chemical reactions, but first we have to make sure we're all speaking the same chemical language. 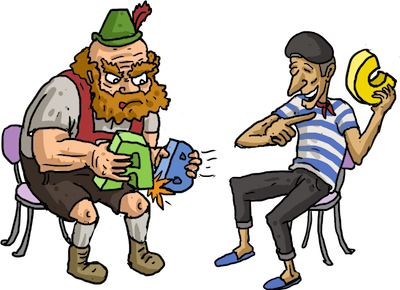 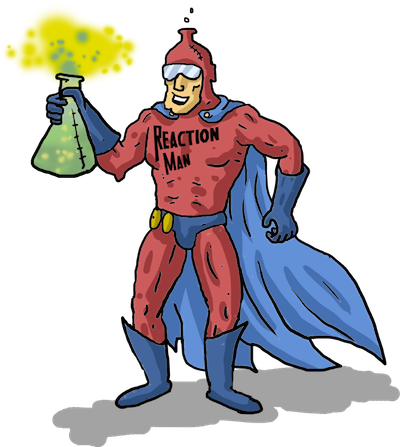 Let's start with the very basics. We can't get much simpler than a chemical word equation. We've already learned that chlorine and sodium combine to give the ionic compound sodium chloride. This reaction can be put into the following word equation:

The plus "+" symbol means "reacts with" and the arrow "→" means "to form" or "yields." The above equation can be translated as follows: "Sodium reacts with chlorine to form sodium chloride."

Word equations are super useful. They identify the reactants and products in a chemical reaction. Reactants are the starting materials; they're the atoms and molecules that we start with and are always located on the left hand side of the arrow. Products are, well, the products of a reaction; they're the molecules we end up with after a reaction has occurred and they're always found on the right hand side of the arrow.

Another simple way to express a chemical reaction is with a skeleton equation. These are nearly identical to their word counterparts, but the chemical name is replaced by the chemical symbol. These equations also up their usefulness by containing the state of matter the reactants and products are in. The state is represented by a symbol (g for gas, s for solid, aq for aqueous, or l for liquid) in subscript next to the right of the chemical symbol. In skeleton form, the sodium chloride story reads like this:

While the skeleton form of an equation is certainly more useful than a word equation, it still leaves us with an empty feeling inside. We feel hollow and incomplete. We feel like Sonny without Cher, Brad without Angelina, or even Posh without Beckham.

To get rid of the hollow and incomplete feelings that result from word and skeleton equations, chemists almost always use the balanced chemical equation as their main vernacular. A balanced chemical equation always obeys the Law of Conservation of Mass which states that in any chemical reaction, the mass of the products is always equal to the mass of the reactants. In other words, matter can't be created or destroyed. If we start out with two chlorine atoms in the reactants, we must end up with two chlorine atoms in the products.

To continue our sodium chloride synthesis example, the correct and balanced chemical equation is:

The large numbers that are placed in front of chemical formulas are called coefficients. They represent how many of each reactant or product (atom , molecule, or mole) take part in the reaction. In the above example we added a two in front of the Na and NaCl symbols to indicate 2 sodium atoms react with 1 chlorine molecule to give 2 sodium chloride molecules. Coefficients are essential to create a properly balanced chemical equation. Remember, coefficients are the numbers that appear to the left of a chemical reactant or product, while subscripts are the little numbers found to the right of a chemical reactant or product.