The actual electrons are quite small compared to the nucleus. However, do not be deceived. Though small, electrons are responsible for much of the chemistry that we "see." Atoms share electrons, steal electrons, give away electrons...the world of chemistry revolves around electrons.
The nucleus is made of neutrons and protons. We promise we won't break the pieces down any farther; although the sub particles that make up the nucleus have cool names like "strange" and "charm." Hey, who ever said scientists don't have a sense of humor?

Some other little details about the atom and its parts: electrons are always negatively charged. Protons are positively charged, and you guessed it, neutrons are just neutral. The number of protons that an atom contains determines the identity of an atom. We'll come back to that point soon. 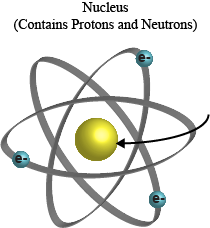 Pop quiz: True or False. The center of an atom, called the nucleus, is held together by a force that is ten times stronger than gravity.

Answer: False. The force holding together protons and neutrons in the nucleus is approximately 1,000 times stronger than gravity2. Here are five amazing things you never knew, and never knew you wanted to know (but definitely will appreciate), about the mighty atom: atomic trivia.