This is elementary, my dear Watson. Actually, the elements are anything but elementary. For starters, there are 118 known elements and a few still undiscovered elements1. How do we know that there are unknown elements? A great philosophical question this is, young Jedis. We will get to this in a bit. First though, let's introduce the ones we've already discovered. Watch this classic song about the elements. It is aptly named, "The Element Song." 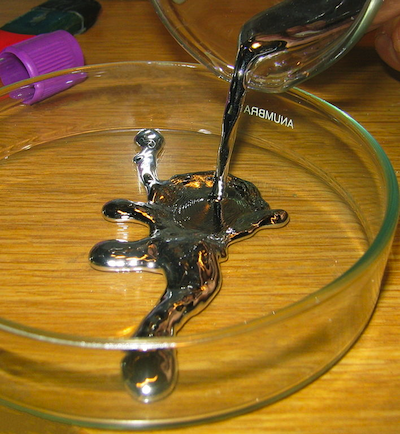 Pure elemental mercury is shown being poured from a beaker into a Petri dish. This liquid consists of only mercury atoms. Image from here.

While we are on the topic of food, let's make an analogy between elements and ice cream. There are a handful of basic flavors of ice cream such as the standard vanilla, chocolate, and strawberry flavors. Let's say each of these are "elemental types of ice cream." If we wanted to create new crazy flavors, a là Ben and Jerry's, we would start mixing together some of the standard "elements" like vanilla swirled with strawberry ice cream. These new mixtures are analogous to chemical complexes. Time for a snack break yet? Almost.

Chemists represent the compound using the following notation: C12H22O11. For now, take note that there are three letters that represent each one of the three elements that composes a sugar molecule: C is for carbon, H is for hydrogen, and O is for OMG, chemistry is super neat (or oxygen). While chemistry may look like a different language, it isn't too hard to decipher once the rules are laid out. Those little subscripts in the chemical formula represent the number of atoms of each element that come together in a single molecule. 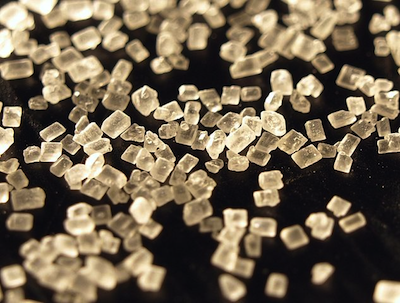 Crystals of sugar shown close-up. On an even smaller level, sugar is made up of carbon, hydrogen, and oxygen atoms stuck, or bonded, together to form molecules.

Now back to the issue of the undiscovered elements. How is it possible to know that something, which has not yet been discovered, still exists?

When we look at the elements that have been discovered, we notice patterns. Upon studying patterns for the discovered elements, scientists noticed that a few elements seem to be missing. It is like doing a jigsaw puzzle and realizing once you've used all the pieces that a few are missing from the completed puzzle. We know that they are out there just waiting to be found. The first place we should look is under the couch.