Ah, now on to what really matters: matter. Matter exists in three forms, or what scientists like to call states or phases. Matter, on planet earth, exists primarily in a solid form, liquid form, or gaseous form.

But what about oobleck? Oobleck is the goo that we get when cornstarch is mixed with water. How would you classify that stuff? Is it a solid? Or a liquid? Or some extra-terrestrial creation? It's called a non-Newtonian liquid, and it's awesome.

Green oobleck...is it a solid? Liquid? Who knows, but it is pretty fun to throw at people. For the record, we didn't say that.

Confuddled? Inspired to go walk on a pool of oobleck? Maybe life is a little bit more complicated than commonly presented. Maybe matter isn't always in an easily classifiable solid, liquid, or gaseous form—but let's go with it for now.

Matter can change from one form, or phase, to another. Case in point: the oobleck in the YouTube video appears solid for a brief second then it behaves as a liquid again. 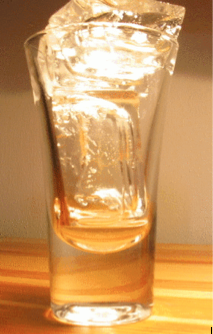 Water in both its solid and liquid form. As the ice cubes melt, a physical change occurs. Check out a video here.

A phase change, going from one state to another, is a physical change. In a physical change the identity of the matter itself does not change. Oobleck is still oobleck. Water, or H2O, is still water. We don't mean to insult physical changes; they are pretty cool. (Watch dry ice subliming from its solid state directly to its gaseous state.)

Chemistry starts to get interesting when we look at chemical changes. A chemical change occurs when a new substance is formed. Start thinking about explosions, fireworks, and crazy carbon snakes. First thing's first though, grasshopper. Before we can really start to understand what happens in a chemical change, we must take an even closer look at what makes up matter.