Chemists like to know why matter behaves the way that it does. Imagine two chemists having a conversation. One of whom happens to have a thick New England accent.

"Say, what's the matta with this matter?"
"I don't know. Let's look into the matter."
"Okay. Nothing else mattas until I understand this matter."

We can stop there. Just like a psychologist studies the behavior of humans, chemists study the behavior of matter. Lucky for us, matter doesn't have too many feelings on the subject and tends to be more predictable. Chemists study patterns that govern how atoms come together and break apart. Atoms are small subunits of matter. In some ways, atoms are similar to people. Certain atoms "like" other atoms and "dislike" others—they just don't tend to change their minds as much.

Understanding the behavior of matter on an atomic level allows us to make predictions about what matter might do in certain circumstances. This knowledge is powerful because it gives us control over our environment and will help us achieve world domination. Mwahaha. Oops, did we let that slip?

Check out these Nobel laureates talking about why they love chemistry. 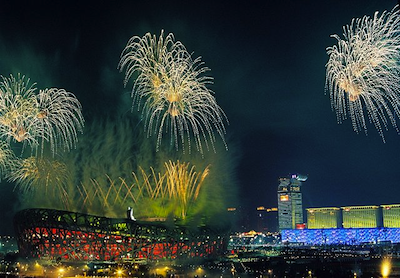 Fireworks over Beijing during the 2008 Summer Olympics in China. Image from here.