Environmental Chemistry - The Air Up There

The Air Up There

Before we wander down the yellow brick road of atmospheric chemistry, let's talk about the basics of the earth's atmosphere. The mass of earth's atmosphere is approximately 5.27 × 1018 kg, its density at the surface is 1.3 kg/m3 and it's remarkably similar to a peanut butter and jelly sandwich with the crust cut off34. Just like a five year old's sandwich, the atmosphere can be divided into four zones. Unlike that PB&J, the zones are based on temperature and pressure.

The troposphere, which extends approximately from 0 to 15 km from the earth's surface, is where most of us spend our time. Coincidentally, this zone is also where most of the atmosphere spends its time; approximately 85% of the atmosphere is in this zone. The troposphere is the opposite of a middle school dance; everything mixes like crazy. The reason for this frantic mixing is the upward movement of air. In this unstable region, temperature decreases with altitude. Much of this chapter will focus on reactions, like the formation of photochemical smog, that take place in the troposphere.

The mesosphere goes from 50 to 85 km. This region is like the Area 51 of the atmosphere, being home to strange things like sprites and noctilucent clouds. If you think we're kidding, we're so not kidding. A sprite is a red flash that appears above thunderstorms, not a character from Grimm. In this "truth is stranger than fiction" zone, the temperature undergoes another reversal and decreases with altitude. Make up your mind, atmosphere.

The thermosphere is the final zone, extending from 85 to 500 km above earth's surface. Here, the temperature increases with altitude. Parts of the thermosphere are what some people might call outer space. This is where the International Space Station and space shuttles orbit the Earth. 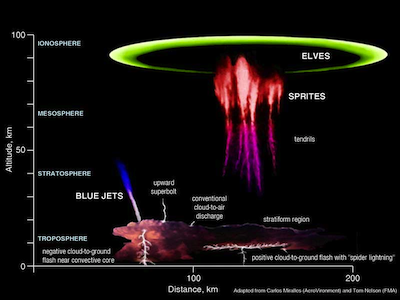 There are two main ideas we should take home from this atmospheric primer:

1. The temperature profile of the atmosphere is like playing the "getting warmer game" with a preschooler: cold, hot, cold, hot.

2. Some atmospheric zones are unmixed and stable, while others have molecules mixing like crazy.

Aerosols: The Gossips of the Atmosphere

Aerosols are the gossips of the atmosphere. They tend to interfere, change everything around, and scatter when confronted. To elaborate, they specofically interfere and scatter solar radiation and change the characteristics of clouds. Even though aerosols are gossips, only 10% of aerosols are anthropogenic35, or caused by humans (anthropo = human and genic = produced by, so anthropogenic = produced by humans). The majority of aerosols fall into two major types: sea salt aerosols (SSA) and dust.

Because any standardized chemistry exam is unlikely to test you on your ability to compare aerosols to gossips, let's go over the more formal definition. An aerosol is a suspension of particles in a gas. Atmospheric aerosols are particles that stay aloft in the air. Examples of atmospheric aerosols include dust and pollen.

Aerosols vary by location and season. Over desert regions in the Northern Hemisphere, there are great swirling masses of mineral dust. Forest fires lead to domination by aerosols, including smoke and soot. In the Indo-Gangetic Plain2, desert dust and urban pollution are the main aerosols.

How long an aerosol floats around in the atmosphere is an instance where size matters. Large particles settle out quickly; particles greater than 10 μm in size would need strong air currents to keep on floating. Particles between 0.1 and 1 μm can stay aloft for longer than a month and can travel larger distances. Smoke from a Siberian wildfire can reach the Arctic Circle, while pollution from China often makes its way to LA34.

Long-rage transport of aerosols and gases: Inputs of aerosols to the atmosphere include sulfur emissions from the ocean, VOCs, and carbon dioxide (among other compounds) from industry and forests. Some of these, like CFCs, find their way all the up into the stratosphere, while others are literally rained out. (Source)

While the small particles are the ones that move great distances, their numbers are limited because they tend to join together and form larger particles.

Circling back to our gossiping aerosols, let's discuss the tendency of aerosols to scatter and interfere with light. Unlike smaller gas molecules or molecular clusters, particles cause the scattering of visible light and interfere with light transmission. Aerosols and the clouds they form reflect up to 25% of incoming solar radiation. A good rule of thumb is that dark colored aerosols absorb light, while light colored aerosols reflect light.

A totally off-topic but interesting comment: most people can raise their big toes without moving their other toes, making a pedal thumbs up! In a completely unofficial Shmoop survey we determined that 8 out of 10 people can perform this trick, though most don't realize it until asked to do so. 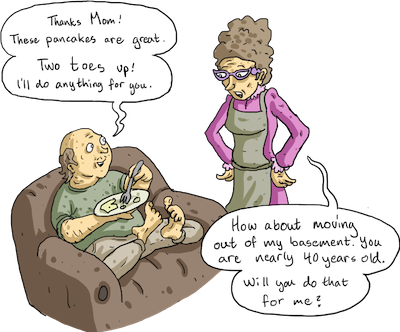 Not only is it a useful party trick, but if you ever lost the use of your thumbs in a freak DS accident, you could still give your mom's chocolate chip and olive pancakes two enthusiastic toes up.

Back to the topic of albedo. In earth science, albedo is the amount of light an object reflects. This albedo is not to be confused with the other albedo, which is the stringy white part of an orange.

Albedo is expressed as a number from 0 to 1: 0 meaning the object reflects no light and 1 meaning the object reflects all light. So your darkest (insert name of your favorite Death Metal band) t-shirt would have a lower albedo than your little sister's bright white unicorn shirt. Dark aerosols deposited on ice or snow would decrease the albedo of the surface and result in warmer temperatures. Not only should you avoid yellow snow, it's also bad for the planet.

Scientists are not really sure how aerosols affect global temperatures, but most agree that the overall effect is to decrease temperatures18. In areas with high concentrations of aerosols, the albedo might be as high as 0.85. That's the maximum albedo of fresh snow26.

A volcanic eruption, like the 1980 eruption of Mt. St. Helen's, is a good way to picture the scattering effect of aerosols. A violent eruption spews sulfate aerosols into the stratosphere where they remain for years. These aerosols are light colored and so reflect light (or in fancier terms they scatter solar radiation). This radiative forcing is the reason that temperature in the troposphere generally decreases following a large volcanic eruption.

Sulfur dioxide emissions over the course of a week in June 2009, following the Sarychev Volcano located in the Kuril Islands. The Kuril Islands are located northeast of Japan. The 2009 eruption is the largest known eruption for this volcano6. The International Space Station grabbed some stunning shots of the eruption, which can be accessed via this link.

While in the troposphere volcanic eruptions tend to decrease temperatures, they increase stratosphere temperatures. In the stratosphere, aerosols absorb solar radiation that is reflected from earth's surface. The behavior of species in the atmosphere really is all about location, location, location. This will become even more apparent in our ozone smack down in the next section.

Another way volcanic eruptions affect global temperatures is by contributing to a layer of aerosols in the stratosphere known as the Junge Layer, not to be confused with the Jung layer (a layer of absolute nothingness).

The Junge layer is named after the scientist who is credited with its discovery in 1961. It's comprised mostly of sulfuric acid droplets. Some of this sulfuric acid was injected by volcanic eruptions, like the infamous 1991 eruption of Mt. Pinatubo in the Philippines. 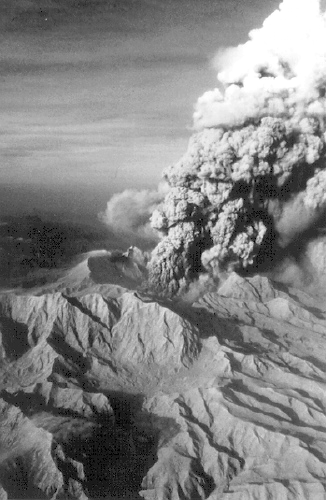 June 15, 1991 eruption of Mt. Pinatubo in the Philippines. Eruptions like this one can inject sulfur directly into the stratosphere and contribute to the Junge Layer. (Source)

Another natural source of sulfur for the Junge layer is carbonyl sulfide (COS), the most abundant sulfur gas in the atmosphere. COS is naturally released from soils, salt marshes, and certain types of trees. COS makes its way up from the troposphere.

Like a dying character in a cheesy movie, once it goes toward the light—poof—no more COS. Because this is chemistry, we'll give less colorful version with the actual equation below (reaction 1.0). In fancy chemistry terms, the COS is oxidized by photochemical reactions. hv has to do with the energy associated with light.

Anything that interferes with radiation from the sun will affect global temperatures. A layer of gas in the atmosphere is going to impact the earth's temperatures. The sulfate aerosols impact temperatures by acting like a molecular screen determining how much radiation is absorbed or reflected.

Another type of aerosol is sea salt aerosol (SSA). SSAs are exactly what we would guess they are: aerosols that have their source in the sea. If you have ever seen a whitecap at the beach, you have seen the formation of SSA. The wind bursts the bubbles on the waves and the drops (or aerosols) then end up in the atmosphere11. These aerosols are a natural source of Cl2 in the troposphere. Bromine, iodine, sodium, magnesium, and calcium are also found in SSA. 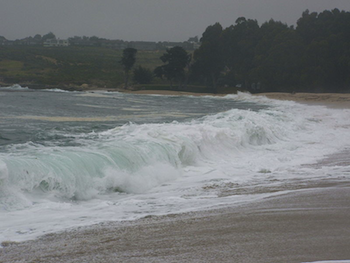 The white on the waves shows the release of SSA. The residence time of SSA in the first layer of the atmosphere can be anywhere from 30 minutes to 60+ hours. These tiny particles have a big impact on the earth, affecting everything from local air quality to biogeochemical cycles and the earth's radiation budget. (Source)

We already covered how aerosols interfere with radiation and impact temperatures, now we will cover how aerosols are like atmospheric gardeners. They are the seeds, or condensation nuclei, for clouds.

No Aerosols = No Clouds