Biogeochemical cycles describe how different species cycle through all the different spheres on Earth: the atmosphere, the hydrosphere, the biosphere, and the geosphere.

There are sinks or reservoirs for each species, and sources or inputs for each. Over the last 60 million years, the composition of the spheres has not significantly changed so we can piece together a decent model of how the different species cycle through the spheres.

Because sulfur is one of the six most abundant elements on earth, we will discuss its cycle first. If the different species of chemicals were fast-food chains, sulfur would be McDonald's—there's a ton of it and it can be found almost anywhere.

Sulfur in the atmosphere is like any fashion trend, from animal prints to mom jeans. Like all fashion trends, it has a short residence time. This is largely because sulfur compounds are oxidized to SO4. This sulfate makes a speedy exit from the atmosphere via precipitation.

In the sea, by contrast, the mean residence time for a sulfur molecule is over 3 million years. Sea sulfur is more like the little black dress: a classic that will be probably still be worn thousands of years in the future for interstellar cocktail parties. But who knows, maybe mom jeans will make a comeback.

Since sulfur is one of the most abundant elements on Earth, it's not surprising that sulfur is found in rivers. When minerals containing sulfur, such as pyrite (FeS2) and gypsum (CaSO4), are weathered, sulfur is released into rivers (see Reaction 1.1). Anthropogenic sources of sulfur in rivers include mining and air pollution. In addition to contributing to the sulfur load in rivers, gypsum is also a source of atmospheric sulfur in desert areas.

In addition to the atmosphere and the sea, other sulfur reservoirs include sedimentary rocks, plants, and soil. Most of the sulfur on Earth is found in the crust, while the atmosphere is the smallest sink for sulfur.

It's called the sulfur cycle, not the sulfur bank, so along with reservoirs there are also sources or inputs to the cycle. Volcanic eruptions, dust storms, biogenic emissions from wetlands and soil, and forest fires, all add sulfur to the atmosphere. Large particles tend to stay local, while smaller particles may travel hundreds or even thousands of kilometers. Sulfates from dust from the deserts of Saudi Arabia, for example, have been found in the Indian Ocean 10.

Next up is the carbon cycle. Much of what we know about timing of the carbon cycle is due to a little isotope called Carbon-14. C-14 has helped scientists determine how long carbon dioxide stays in each of its reservoirs.

In the surface ocean, carbon might hang around for 11 years, while in the deep ocean carbon acts as a perpetual child, unwilling to leave home, and sticks around for 350+ years. In addition to stalking carbon through its biogeochemical cycle, the C-14 isotope can be used to determine the age of everything from pine trees to seashells.

The global carbon cycle (USDOE). Units are gigatons of carbon per year. (Sourc)

From the carbon cycle diagram above, the major sinks for carbon are the ocean, fossils, biomass, soil, and photosynthesis. Human emissions, microbial respiration and decomposition, and plant respirations all add carbon dioxide to the atmosphere.

Decomposition adds carbon dioxide to the atmosphere through an oxidation reaction. The half-reaction is shown below:

We all knew that one kid growing up who would eat anything from beef jerky-flavored lollipops to grandma's famous hot dog and lentil soup, and decomposition of carbon compounds is the reaction version of that undiscerning palate- it's not choosy about its oxidizing agent and can occur with oxygen, nitrate or sulfate.

Reactions with oxygen and sulfur compounds result in the production of carbon dioxide. The reaction with nitrate produces nitrite, ammonium ions, or nitrous oxide and plays an important role in the nitrogen cycle (sorry to steal your thunder, carbon cycle).

In addition to decomposition, other factors come into play when discussing carbon on land. In the soil, plant roots and soil microbes release carbon dioxide which can lead to chemical weathering. Biomass is another carbon sink, particularly through the process of photosynthesis: 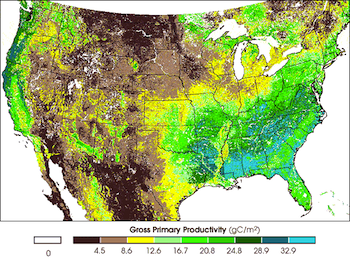 The rate at which carbon is stored in plants can be equated to the rate of photosynthesis or gross primary productivity (GPP). GPP varies across the United States and we can use the map to compare carbon sinks across the country. Blue areas show areas of greater carbon storage. (Source) 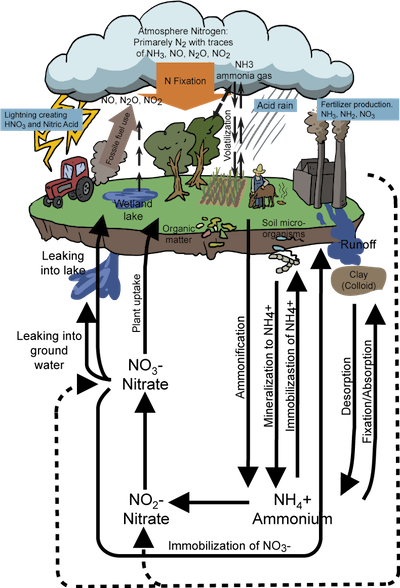 Atmospheric nitrogen, N2, is fixed by lightning and bacteria. This process can also occur via the Haber process: the process in which industrial ammonia is produced. Plants are able to use this fixed nitrogen. It may also undergo ammonification (fixed nitrogen → NH4+), then nitrification (NH4+ → NO2- → NO3-) and finally will be assimilated by plants. Denitrification, performed by bacteria, returns terrestrial nitrogen to the atmosphere.

Here's the down and dirty on the nitrogen cycle. 78% of the atmosphere is nitrogen, and nitrogen is an important nutrient for most plants. We don't have Jack and the Beanstalk sized plants taking over earth, however, because most nitrogen on earth is not available to plants. In order for plants to use nitrogen, it first has to be fixed.

The world can be divided into those things that can fix nitrogen by breaking the triple-bonds of N2 and those that cannot. Soil bacteria, like rhizobium, some types of blue-green algae, fava beans, and lightning can all fix nitrogen. The reaction below shows the biological fixation of nitrogen (BFN).

The NH3 then combines with H+ ions to form ammonium ions (NH4+). In the absence of hydrogen ions, nitrates (NO3) will be formed. Plants use both ammonium and nitrates for life processes. 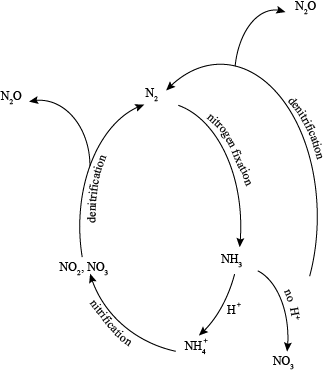 Nitrification is the oxidation of ammonia to nitrite (NO2) and then nitrate (NO3).

In 1991, scientists entered Biosphere 2, a closed self-sustaining system where they were to live for two years.