In the short version of this section, we stuck to the basics and skipped ammonification and the more complex of the chemical reactions. If you felt short-changed, this section is for you. We'll start with the reaction for nitrification.

Interestingly, this process leads to the release of H+ ions and, in the absence of other reactions, the acidification of the soil.

Next up is our aptly-named denitrification. Denitrification largely occurs in stagnant freshwater, deep ocean waters and in aerobic soils. Heterotrophic bacteria in soils, for example, perform denitrification:

Despite our detailed knowledge of the nitrogen cycle, we still don't know exactly where and how quickly nitrate travels once it's in the soil. Scientists at UC Davis are currently tracing nitrogen through the soil in an attempt to answer these questions16.

It's helpful to have this information because high levels of nitrates in drinking water are linked to blue-baby syndrome, birth defects, thyroid cancer, and a host of other health conditions. Additionally, a build-up of nitrates in bodies of water can lead to eutrophication, a process in algae takes over the world (or a lake) and everything else meets an untimely demise. There's also the fact that the answers to these questions will help farmers make like Goldilocks and apply exactly the right amount of fertilizer.

So, How About That Carbon?

Stalactites with a Side of Bacon (The Carbon and Water Cycle)

We all know the story. Farm boy in the 1800s is wandering around with his trusted collie. The dog runs away and the boy follows him into a cavern full of geologic wonders. While the dog story is cool, we're more interested in the chemistry of the cave.

It all starts with rain. The rain trickles through the rocks, picking up carbon dioxide along the way, and dissolves the calcium carbonate in rocks and soil.

This solution keeps traveling through the rocks until it reaches an edge, at which point it will drip down and deposit. Over thousands of years, this reaction on repeat will form stalactites. Notice that the second reaction is the reverse of the first.

You're probably feeling a sense of betrayal since the section title included "bacon" and there has been no mention of this delectable breakfast treat thus far. Here's how this all connects to bacon. Sometimes these calcite deposits on the ceiling of caves look like bacon, as can been seen in the photograph below. 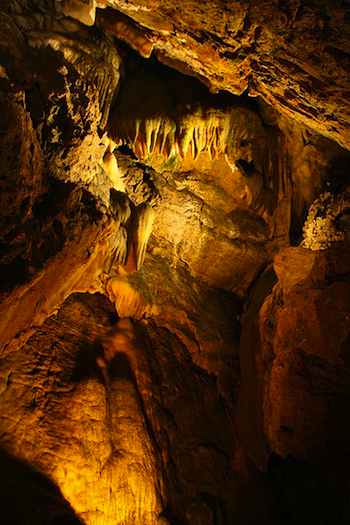 Quick tip: stalactites are deposits found on the ceilings, while stalagmites are the same deposits on the ground.

Any textbook worth its weight in matsutake mushrooms should feature at least one smack down. Ours star is ozone or O3, the Jekyll and Hyde of molecules. In the stratosphere, ozone is a beloved molecule, shielding humans from the dangers of UV radiation. In the troposphere, ozone is a nasty pollutant formed from reactions between nitrogen oxides (NOx) and volatile organic compounds (VOCs).

Round 1: Would the real O3 please stand UP?

In the stratosphere, ozone plays a starring role in controlling the amount of UV radiation that reaches earth, this means stratospheric ozone would be Dr. Jekyll. There are other molecules and atoms that can control the amount of UV radiation reaching earth, but ozone is the lead actor in this UV play. In the stratosphere, the cooler air is found below. This temperature inversion limits convection, creating that middle school dance environment we talked about earlier. There is very little mixing. 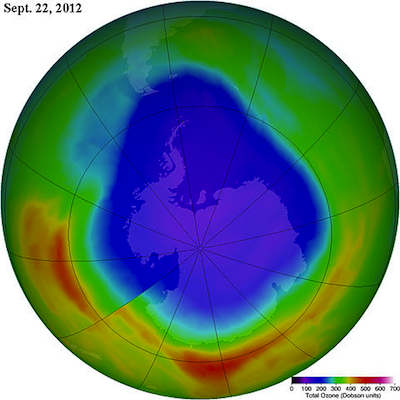 The Antarctic Ozone Hole in September of 2012. The purple and blue areas have lower ozone concentrations and are considered the ozone hole. (Source)

How is ozone formed? The answer is the Chapman reaction sequence, which describes the natural production of ozone through photolysis of molecular oxygen. In less science-y terms, this means that light breaks down O2.

Here are simplified versions of the first two reactions in the sequence (again, hv has to do with the light's energy):

Everything seems to have a minimum number: the shortest height someone will claim on a driver's license, the minimum amount of money required to wear that hand-knitted alpaca Christmas sweater with matching shorts to school, and the minimum number of reps needed to complete for bicep curls to beat that insanely ripped old dude in the corner. The dissociation of oxygen is no exception to this magic minimum number rule, but in this case the magic number is 240 nm.

The dissociation of oxygen, like building a Lego-version of Freddie Mercury is hard work, and radiation with wavelengths greater than 240 nm would not have enough energy to cause this reaction to occur (the higher the wavelength is, the lower the energy is). This means radiation that exceeds this wavelength would pass through the stratosphere. Remember, it's called the ozone layer, not the ozone wall.

In Reaction 2.0, the M represents a non-reactive partner in the collision. M acts as a wingman for oxygen, taking up the extra energy and stabilizing O3 so it doesn't fall apart back into O and O2. M is likely to be either N2 or O2, as these are the main constituents of the stratosphere. Unlike reaction 1.9, this reaction is fast and furious.

In Reaction 2.2, the light's energy (or a "photon") splits ozone into diatomic oxygen and one, lonely oxygen atom. This reaction takes a happy trio and quickly rips one of the members from his friends. Sounds like an episode of Three's Company.

The second decomposition reaction, Reaction 2.3, smashes that lonely oxygen atom into another happy trio, resulting in two modestly happy duos of O2 and O2. This smashing reaction occurs slowly due to its fairly large activation energy and the fact that the concentration of odd-oxygen species is very small. By the way, an odd-oxygen species is exactly what it sounds like: oxygen that has an odd number of atoms, like 1 or 3.

The intensity of solar radiation varies with altitude, so the lifetime of O2 also varies with altitude. In the upper stratosphere, O2 has a lifetime of approximately 1 hour. At 20 km, its lifetime is 5 years. At approximately 23 km, there is a lot of O2 and solar radiation is intense enough to maximize ozone production. This is why we call this altitude the ozone layer, though the exact altitude of maximum ozone production varies with the month and latitude. The upper region of the stratosphere absorbs some of the 240 nm radiation, but enough makes it through to result in ozone production. 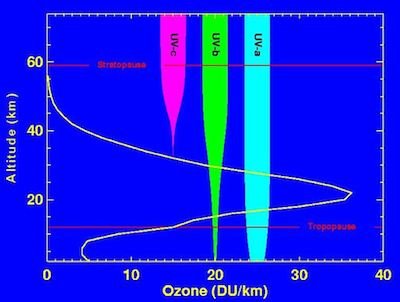 We now know that the ozone cycle includes its synthesis and its destruction. We also know that ozone varies with altitude and can surmise that this variation is partially due to differences in light intensity. We don't, however, know why so much ozone is destroyed. Scientists think that Reaction 1.4 accounts for a mere 20% of ozone destruction34. If we use the Chapman sequence to calculate ozone concentration, we come up with a value greater than the actual (or measured) ozone concentration.

Stratospheric Aerosol and Gas Experiment (SAGE III). The SAGE III, which could be put into service as early as 2014, will measure aerosols, ozone, water vapor, and other gases. It will take the place of SAGE I and II, which have been collecting measurements since 1979. (Source)

This discrepancy between estimated and measured ozone concentrations means that there are other reactions, besides the Chapman sequence, that account for ozone destruction. Free radicals and catalytic processes can also destroy ozone. Remember, a free radical is an atom with an unpaired electron. Free radicals differ from ions because they usually don't have a charge.

Free radical catalysts include molecules like nitric oxide (NO). Nitrous oxide (N2O) comes up from the troposphere, reacts with light energized O and forms mostly N2 and O2, with a little NO thrown in for good measure:

Once NO is formed, it begins to attack our friendly stratospheric ozone:

All good things must come to an end, and NO ozone destruction is no exception. At some point, NO will react with OH, producing HNO3. This nitric acid leaves the stratosphere by a heterogeneous reaction with raindrops.

Synthetic chemicals, like chlorofluorocarbons (CFCs) are also responsible for ozone depletion. In the next chapter, you'll learn about hydrocarbons, but we'll introduce them briefly here. CFCs are hydrocarbons (think hydrogen + carbon) in which the hydrogen atoms have been replaced by fluorine and chlorine atoms.

A molecule of methylchloride, CH3Cl. This compound can be directly injected into the stratosphere by violent volcanic eruptions. (Source)

Captain Data: To test the hypothesis that chlorine was destroying the Antarctic ozone layer, a scientist by the name of James Anderson stuck an instrument on the wing of a plane and flew through the hole in the ozone layer in Antarctica. The data he collected showed that where chlorine monoxide (ClO) concentrations were high, ozone was low and vice versa.