Because you can never know too much about the Chapman reaction sequence:

After ozone is split into two free oxygen atoms, one of these free oxygen atoms reacts with O2, forming ozone. Before this can happen, though, the oxygen atom needs to lose some energy so it has a more stable electron configuration. This single oxygen atom will crash into a molecule so it can lose this "extra" energy. The equation for this reaction run-in is shown below:

Nope. That's not a trick. Let's draw in some electrons on the oxygen atoms to see how the electron configuration changes:

In this section we learned about processes that destroy ozone, now we're going to go into a little more detail on these processes. In a catalytic process involving ozone, a molecule reacts with ozone. An oxygen atom is removed, resulting in oxygen gas and an oxygenated form of the catalyst:

X then reacts with an oxygen atom to create another molecule of O2. These catalysts (X) tend to be free radicals:

For ozone depletion, the reactions are limited by the amount of reactants. When there is a scarcity of oxygen, like in the lower ozone layer, two catalysts work to break down ozone:

Chlorine also plays a role in ozone destruction. During the winter months in Polar Regions, aerosols form clouds in the stratosphere. The large surface area on these clouds serves as a chemical dog-park, and compounds like CFCs are the dogs36. The CFCs have an abundance of room to undergo reactions that ultimately result in the destruction of ozone. The first step to total ozone annihilation is the decomposition of CFCs by photochemical reactions, resulting in active chlorine:

This active chlorine destroys ozone. Fortunately, Cl eventually forms HCl and mixes back down into the troposphere by interacting with cloud droplets:

In a dry atmosphere, ClO reacts with NO2, forming ClONO2. ClONO2 is inactive and removes both ClO and NO2 as contenders for ozone destruction.

Of course, CFCs are not the only source of chlorine in the atmosphere. Sea salt aerosols are the largest natural source of chlorine in the troposphere. SSAs, however, have a relatively short residence time in the troposphere and generally don't make it up into the stratosphere. Larger particles stick around for 30 minutes or less, while smaller particles remain for up to 60 hours. These short residence times mean they are not significant factors in the destruction of stratospheric ozone. Later in this chapter, we'll discuss SSA in depth. We promise it's much more interesting than it sounds. Or maybe we're just saying that…

Another way cirrus clouds affect ozone concentrations is by providing a site for those wicked activation of chlorine reactions. In the tropics, cirrus clouds can claim credit for a 25% loss in ozone23.

Why the Ozone Layer Is Where It Is

Above the ozone layer, there is an abundance of UV radiation with the right wavelength to chop the bond in O2. However, because atmospheric pressure decreases with altitude, there is a relatively low concentration of O2, meaning there is less ozone here.

Round 2: Hyde and Seek in the Troposphere

In the stratosphere, ozone protects us from harmful UV radiation. In the troposphere, however, ozone is not a benevolent molecule; it is the main ingredient of the photochemical smog that plagues many major metropolitan areas worldwide. It's a chemical dictator that annihilates (oxidizes) biological tissue. In Biology class, you might talk about the health effects of tropospheric ozone, for this guide we'll stick to semi-straight chemistry. 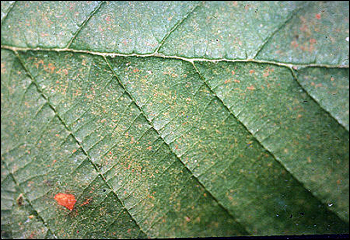 The discoloration on this leaf is due to tropospheric ozone. In addition to injuring the leaves, ozone can also cause plants to drop their leaves early, produce fewer seeds, and increase a plant's susceptibility to insects and disease. (Source)

The two nitrogen oxides are NO and NO2. We'll start our discussion with NO2.

The amount of ozone is proportional to the ratio of NO2 to NO, so if there are no other reactants hanging about, ozone production is fairly low After this dissociation reaction, the single oxygen atom then reacts with diatomic oxygen, forming ozone:

Luckily OH radicals act like a chemical scrubbing brush, removing NO2 within a day in the mid-latitudes10. NO2 is needed for ozone production.

Urban areas, like NYC, tend to have higher concentrations of gases like NO, NO2, and SO2. The main source of NOx gases is emissions from vehicles. These gases contribute to the acidification of the rain and the formation of smog. Many of them also act as indirect greenhouse gases. (Source)

The second class that forms tropospheric ozone is VOCs. VOCs (volatile organic compounds, not the Vulcan Club Owners of Spain) are responsible for much of the production of ozone in the troposphere. For the VOC reactions, the instigator is almost always an OH radical.

VOCs are involved in the formation of photochemical smog and tropospheric ozone. The two main sources of VOCs are solvents and vehicles. (Source)

So we have NOx and VOCs forming ozone in the troposphere. This is problematic for anything alive since it attacks ALL living tissue. It doesn't just hang out in the troposphere by itself, it interacts with other molecules and forms smog.

The first step in making smog involves the horse-and-buggy's replacement—the car. Here's the production of nitric oxide, in the internal combustion engine:

When NO is released in the air, it reacts with oxygen to form nitrogen dioxide, which gives smog its lovely brown color:

The reaction with oxygen is slow so most nitrogen dioxide is produced by reactions with ozone: Reaction 4.1: NO + O3 → NO2 + O2

The recipe for smog is as follows: Mix up some partially oxidized hydrocarbons, ozone, and some other stuff like VOCs and wait for smog to form.

Beyond being an eyesore (it is an eye irritant), smog can be hazardous for health and visibility reasons. If you've ever been in Beijing, LA, or Mexico City, then you've seen how smog can severely limit visibility. It's hard to see in a smoggy city because the aerosols in smog scatter solar radiation.

Smog in Beijing: This is a clear (or smoggy) indication of how aerosols can reduce visibility. On particularly smoggy days in Beijing, it is difficult to see more than a few feet in front of you. (Source)