LeChatelier Shot the Sheriff, But He Did Not Shoot the Deputy

LeChatelier's Principle sounds like a long shot horse at the Kentucky Derby. If it were, we definitely wouldn't want to bet on it. Why? Because betting on a horse that tries to maintain equilibrium and stay in the pack is a sure way to lose your money.

LeChatelier's Principle states that a reaction in equilibrium will resist a shock to the system. In other words, if something is introduced to the reaction, the system will change to reestablish equilibrium. 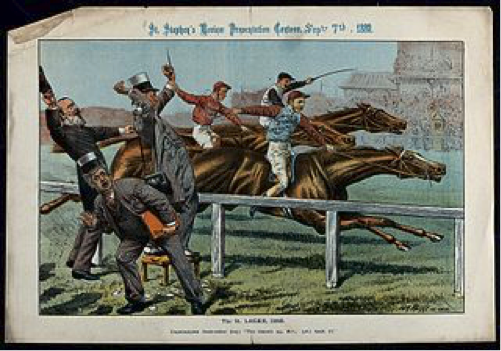 Drat, why did I bet on LeChatelier's Principle again?

Let's keep going with this horse example. Our horse is hanging in the middle of the pack, when the pack decides to slow down. Instead of bolting into the lead, that dolt horse of ours slows down with them. The horse maintains its equilibrium position by adjusting its speed to match the group. It adjusts itself to minimize the shock to the equilibrium.

To get more technical, Le Chatelier's Principle states that if an external stress is applied to a system at equilibrium, the system adjusts in such a way that the stress is offset to try to get the system back to equilibrium. These stresses can include temperature, concentration, pressure, or the addition of a catalyst.

Consider Joe Shmoe. Joe is lounging in his bedroom just chillin' out. Joe's mom comes home and turns the thermostat way up, just because. Joe starts to feel extra warm in his room. His equilibrium is disrupted because his mom has put stress on his system. How typical. In order to reestablish equilibrium, Joe replaces his Snuggy with shorts and flips, so he feels comfortable again.

Remember, the system is at equilibrium when Q = K, just like Joe in his Snuggy before his mom turned the heater onto full blast.

We can actually calculate what the final pressures of the reactants and products will be, with something called an ICE table.

The table below summarizes the information given in the example above. We started with the initial pressures of the reactants and products. We want to figure out the equilibrium pressures.

Knowing that the Kp for this reaction is 1, we can eyeball these numbers and figure out quickly that the amount of C3H8 must decrease. Therefore, the reactant pressures must increase. Since the ratio of C3H6, H2, and C3H8 was 1:1:1 (obtained from the reaction formula), the quantity of change for each type of molecule was found to be x.

That doesn't seem to be saying much, but stick with us for a sec. We'll be finding x soon enough.

At equilibrium, we take the initial concentration or pressure and modify it by the "change" value. For C3H8, we start with 1.5 atm and reduce it by that all-too-vague value of x.

We can now plug everything back into the equilibrium equation.

There's nothing like a nerdy song and dance to give your brain a break and "study" at the same time.