The song "Ten in the Bed" is a classic children's song. It also is completely insane. How do you get ten kids in a bed? And why is the little kid such a covers hog?

If you are scoring at home, the song goes something like this:

In the time it takes to sing each verse, we lose one kid in the bed and throw one kid on the floor. This is a little like an experiment used to determine a reaction rate. What is a reaction rate? Basically, it is the rate at which products form and reactants disappear in a reaction.

We can represent any reaction with this very basic equation:

This equation tells us that, during the course of a reaction, reactant molecules are consumed while product molecules are formed. The reaction rate is the change in concentration of the reactant (or the product) over time. To continue our super sweet analogy, if we think about our kids in the bed, our equation would look something like:

Let's think about our most basic equation again:

As the number of A molecules decreases, the number of B molecules increases. Those super-smart super-nerdy scientists have come up with a very convenient way to express the reaction rate in terms of change in concentration with time. Need a visual? Check this out.

What about a more complicated equation?

How do you think our rates would change with this simple addition of a number 2? For the disappearance of 2 A molecules, 1 B molecule magically (or chemically) appears. Therefore:

Here's how we would put it into generic terms for a reaction with two reactants and two products:

The reaction rate is given by the amazing, chic, super cool equation:

Formulas are all fine and dandy, but how do scientists determine concentrations and rates in the real world? Good question. There are several ways scientists can measure these rates experimentally. In fact, they use a variety of instruments seen on CSI that conveniently save the day and solve the case every time. 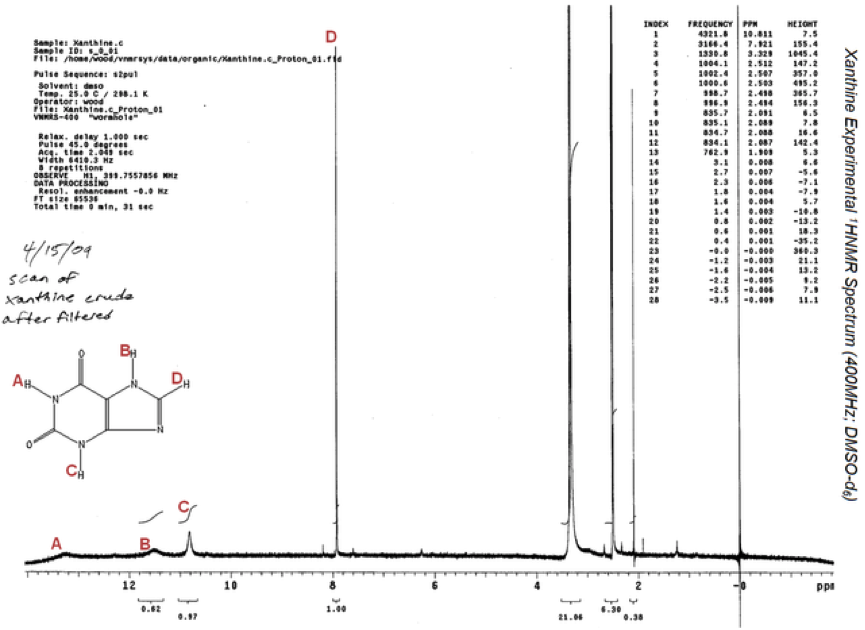 No there hasn't been an earthquake. That's just the NMR Spectrum for Xanthine.

It's time to call the chemical police, because we've got some laws to break.

Okay, not really, but we should talk about rate laws. A rate law is an expression that relates the rate of a reaction to the rate constant and the concentration of the reactants. Hmmm, there's a lot going on in that sentence. Let's try and break it down.

Let's just give it to you straight up.

For this reaction, the rate law looks like this:

Where the heck did x and y come from? And where did C and D go? Let's explain further so no one thinks they're hallucinating. This rate law tells us that if we know the values of k, x, and y, as well as the concentrations of A and B, we can calculate the rate of the reaction.

How does somebody find all these values? Basically, a chemist will hold all conditions constant, and vary just the concentration of the reactants. Usually, one reactant's concentration is doubled at a time and the rate is checked.

Let's give you an example based on the disturbing kids' song we heard earlier.

The kids fall out of bed at the same rate, regardless of whether there are "ten in the bed" or "five in the bed." There is no concentration effect on the rate. Nevertheless, we can use this information to derive a rate law equation that describes the reaction.

In the hypothetical kid dropping experiment, the rate law would look like this:

In the kids experiment, the rate equals the rate constant, k, multiplied by the concentration of the reactant (kids in bed) to the zero power (since there is zero change in the rate). Any number to the zero power is simply 1, so the rate is equal to k × 1 Or, y'know, just k.

A more generic rate law is given below to see how it works.

Each reactant in a reaction is included in the rate law. The exponents for each concentration are determined experimentally. Here's some made-up data for a different reaction.

First, let's check out the ratio of the Experiment 2 to Experiment 1. The only difference was that the concentration of H2 was doubled; with this, we'll be able to track down the value for H2's exponent.

First exponent, down for the count. Now for Round 2; it'll have a bit less Experiment 2 in it, and a bit more Experiment 3. 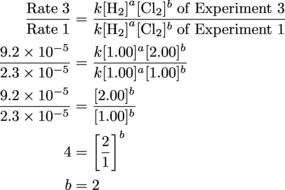 From these results, we can write the experimentally determined rate law:

So, Uh, What Does It All Mean?

The exponents in front of the concentration values in the rate law describe the reaction order of an experiment.

For example, in the kid-falling-out-of-bed experiment, the reaction is described as zeroth order (or 0th order). The second rate law can be described as first order (1st order) in H2 and second order (2nd order) in Cl2. The overall rate law for a reaction can be found by adding the exponents for each reactant in the rate law. So the overall rate law for the second reaction is 3rd order.

Common mistake alert! The stoichiometry of a reaction has nothing to do with the order of the reaction.

To see these concepts in action, check out this video on reaction rates for making "elephant toothpaste."