The Rain in Spain Comes Mostly from Alkanes

Alkanes are the simplest hydrocarbons, following the formula CnH2n+2.

If alkanes were people, they would be seen skipping through the park laughing. This is because Alkanes are the simple and carefree version of hydrocarbons, as they only contain single bonds. An example of an alkane is shown below:

The simplicity of alkanes does not only relate to being composed of only two elements or only containing covalent bonds. On top of all, Alkanes are not very chemically reactive. Basically, alkanes are the party poopers of chemical reactions. They are non-polar, meaning they cannot even participate in hydrogen bonds or mix with water. In fact, alkanes can be thought of as the scaffold that the more reactive functional groups of the molecule are attached to (more on functional groups later).

There are two main types of familiar alkanes: oil and natural gas. If the circumstances are right, both of these familiar alkanes will participate in one of the few chemical reactions possible for alkanes: combustion. 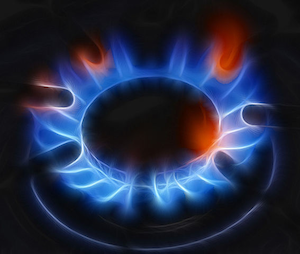 Another example of a hydrocarbon oil can be found in our refrigerators. Salad dressing, when left alone, will separate into layers: a non-polar hydrocarbon layer that does not mix with the polar water layer.

There are endless possibilities for combining carbon and hydrogen atoms, and things can get crazy quickly. Therefore, scientists designed a naming system so they know they are describing the same molecule. Kind of like how smiling is the universal language among humans, IUPAC (The International Union of Pure and Applied Chemistry) has a universal system for naming hydrocarbons. 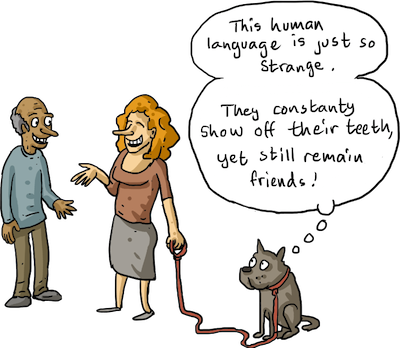 Like smiling, IUPAC has a universal language for naming hydrocarbons.

Naming alkanes is straightforward. You start by counting the number of carbons in the main chain. For the example above, there are four carbons. The alkane can then be named using the standard prefix chart shown below and the suffix -ane:

So, for our four carbon example we use the prefix but- and the suffix -ane. What do we get? Butane.

How do we name this alkane:

Start by counting the number of carbons in the main chain, use the prefix corresponding with this number and the suffix –ane. What do we get? Octane.

Now, what if we come across an alkane that looks like this:

Look for the longest chain of carbon atoms. In this example, it is the chain of three:

Start by naming the longest chain, which is three, or propane. But, we can't forget about the carbons we have not yet counted. These carbons that are outside the main chain are called side-chain groups, and they are named using the same prefixes as main chains:

We are not quite ready to name a branched alkane yet. We need a way to acknowledge which carbon the side-chain branches from. As a rule, the side chain should always branch off the lowest number carbon. In this example, it is the second carbon, so this alkane is called 2-ethylpropane. The "2" notes that the ethyl group is attached to the second carbon of propane. 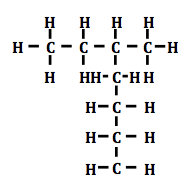 How long is the longest carbon chain? 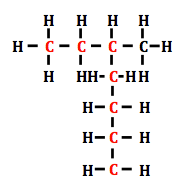 The longest chain consists of 7 carbons, which makes this heptane. The side-chain has one carbon, making it a methyl group. We want it on the lowest carbon, so let's start counting carbons from the upper left hand side. One, two, three—this puts the methyl group on carbon #3. Just to double check, what if we start counting from the carbon furthest down the page? The methyl group will then be on carbon #5. Take all this information and put it together and we get…3-ethylheptane.

Drawing hydrocarbons with C's and H's is getting to be a bit cumbersome. Lets switch to the "ball and stick model," which saves us from constantly drawing carbon and hydrogen atoms. This method allows the carbon atoms to be represented by circles and the hydrogen atoms are "understood," or assumed to be there even though they are not drawn in.

For example, here is butane:

Easier to work with, right? We'll use this notation from now on.

Want to keep on naming alkanes? If so, this site was built for you.

Still can't get enough? Alkanes are the stars of this short film.