Organic Chemistry - The Role of Electrons

The Role of Electrons

Why Are They Always So Negative?

What is so significant about Nobel gases, the atoms found in the far right column? These elements are the most stable of the lot and are not involved in reactions. This is because Nobel gases have a complete octet of valence electrons, or in other words, eight electrons in their outer shell. Just like the outer candy shell of M&Ms determines which one we want to devour first (the blue ones, of course), the number of valence electrons in an atom will determine what chemical reactions can take place. 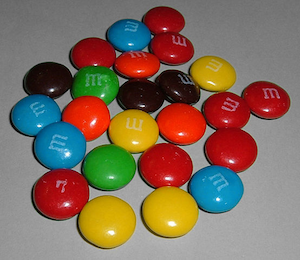 Atoms spend their existence striving to have eight electrons in their valence shell. This can be achieved in various ways…sometimes atoms donate electrons (ionic bonds) and sometimes they share them (covalent bonds).

Lewis structures, or Lewis dot diagrams, are simple sketches highlighting the electron configuration of atoms, and they are all over organic chemistry. They are especially useful in predicting bonding between atoms since lone electron pairs are clearly shown. Remember, all atoms are aiming for an outer shell of 8 electrons.

Drawing Lewis structures is easier than getting along with Great Uncle Lewis—but that isn't saying much. Since carbon is the queen of organic chemistry, let's start with her.

Next, place the valence electrons around the atomic symbol, paired in twos if possible. 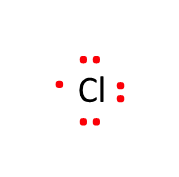 That's it. A successful Lewis structure drawing is in the books.

Because Chlorine has an odd number of valence electrons, there will always be an electron by itself. Not surprisingly, these electrons are called "lone pairs" in organic chemistry.

Let's try another Lewis structure with nitrogen. Nitrogen has 5 valence electrons, which placed around the atomic symbol looks like this:

The fate of the bonds hangs in the valence.