The group 3 elements are scandium (Sc) and Yttrium (Y). The group 4 elements are titanium (Ti), zirconium (Zi), and Hafnium (Hf). Group 5 is comprised of vanadium (V), niobium (Nb), and tantalum (Ta). We certainly can't forget about the group 6 members of chromium (Cr), molybdenum (Mo), and the ever-tricky tungsten (W). Group 7 is home to manganese (Mn), technetium (Tc), and rhenium (Re). Group 8 is comprised of iron (Fe), ruthenium (Ru), and osmium (Os). Cobalt (Co), rhodium (Rh), and iridium (Ir) make up group 9. The group 10 members are nickel (Ni), palladium (Pd), and platinum (Pt). A jeweler's favorite group 10 is home to the elements of copper (Cu), silver (Ag), and gold (Au). Rounding up the transition metals are group 12 which include zinc (Zn), cadmium (Cd), and mercury (Hg). Think this information is useless? You might end up on Jeopardy! some day and then you'll be thanking us. 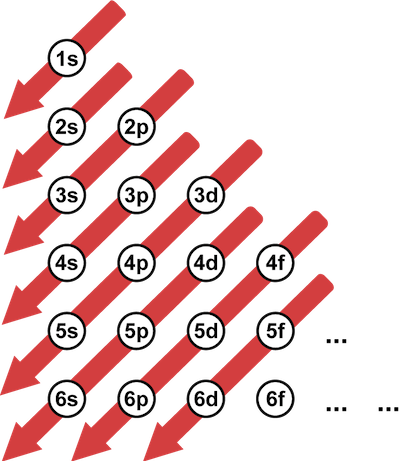 The alkali and alkaline earth groups are in the s-block so their valence electrons went into s-orbitals. The transition metals are located in the d-block so their valence electrons must go into d-orbitals, right? Yes and no. The general rule is to follow the above diagram, but if there is an instance where a quick shuffle of electrons can result in a completely filled or half-filled orbital, the electrons will tend to do the electron shuffle. Electrons like to have the lowest possible energy—that's how they roll. Let's check out some examples.

Pd: [Kr] 4d10
There are quite a few exceptions when filling the aufbau diagram across the transition metal series. The key is to look for opportunities to achieve a filled or half-filled d-shell. We'd love to give you a quick and easy-to-understand explanation for these exceptions, but the reasoning is complicated, confusing, and uber-difficult. Don't worry about it. At this point in your chemistry career it's easier to accept the fact there are exceptions to every rule. Just know that filled or half-filled orbitals save energy and everyone loves to save energy. And electrons are lazy—they'd rather not exert extra energy if they don't need to. They'd stay in bed all day if we let them.

Unlike their alkali and alkaline earth neighbors, most transition metals can be found in nature in their neutral state. The transition elements do have low ionization energies, however, so they exhibit a wide range of oxidation states. Many of the transition metals can lose two or three electrons, forming cations with charges of +1 or +2. Some just lose one electron to form +3 cations, while others form even higher charges. The positive oxidation states allow transition elements to form many different ionic compounds.

Think of a magnet. The attraction or pull becomes weaker the further the magnet is located from the object it is attracted to. It's the same phenomenon as electrons. The further away an electron is from the nucleus, the weaker it is held in place. The loose d-electrons mean transition metals have high electrical and heat conductivity and are malleable. The d-electrons are running around spreading electricity and heat everywhere they go. They are also spreading the love. 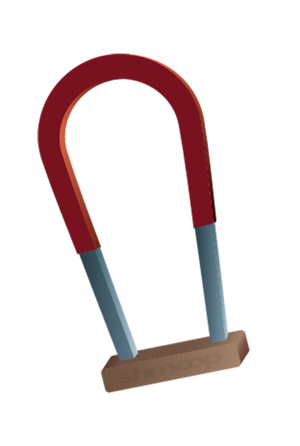 All-in-all transition metals are usually very hard and shiny. They have high melting points and high boiling points. Perhaps the coolest feature of transition metals is the wide range of colors they can exhibit depending on their identity and oxidation state. Think of blood. Sometimes it's bluish and sometimes it's a deep red. All thanks to the different oxidation state of iron.

Because the properties of transition metals are so vast it's probably best to examine a few metals individually. Let's start with titanium (Ti, Z = 22). This means the atomic number is 22. Ti is a hard, strong, silvery metal. It's the eighth most common element in Earth's crust.11 It has a low density but is resistant to corrosion, which makes it a great metal for use in airplanes, golf clubs, bicycles, and hip replacements. 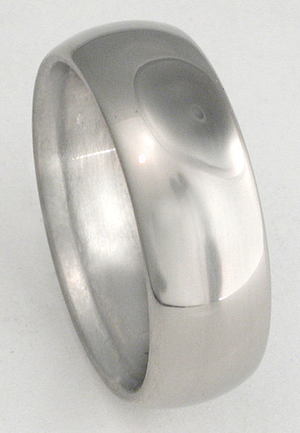 Titanium is all around us.

Just two rows over in group six is chromium (Cr, Z = 24). It's the ninth most abundant element in the Earth's crust and is found in it's +2, +3, and +6 oxidation states.11 It is a hard, steel-gray metal that can be polished to a high shine.

The name "chromium" is derived from the Greek word for color (chroma) because of the wide variety of colorful salts it produces. Interestingly, chromium salts serve as a critical component of breathalyzer tests, used to test for the presence of alcohol. Ethanol, a type of alcohol, is oxidized by chromium salts to produce acetic acid. In the process, the chromium is reduced from the red +6 oxidation state to the green +3 oxidation state. Cops have the suspected offender blow into a tube and if the color changes from red to green then it's off to the tank they go. 12 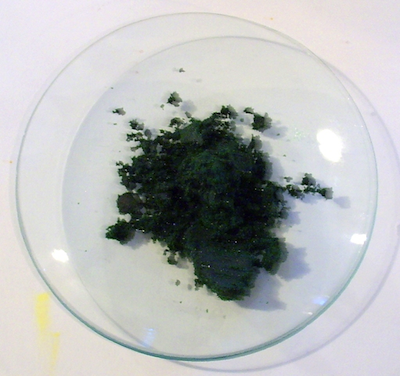 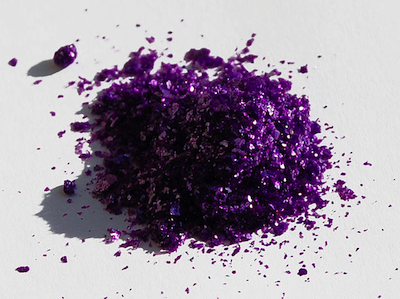 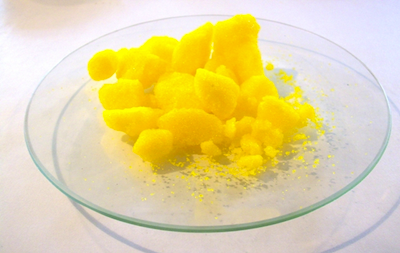 Moving along another two rows, we come across iron (Fe, Z = 26). Fe is an essential nutrient for all living organisms. On average a human adult has 4 grams of iron in the body at all times. Most is incorporated into the protein hemoglobin found in blood.13 We get most of the iron we need from the ingestion of red meat, fish, poultry, cereal, leafy vegetables, peanut butter, and eggs. Industrially, Fe is found in every single steel product that we use today. Superman definitely wouldn't be the same without it. 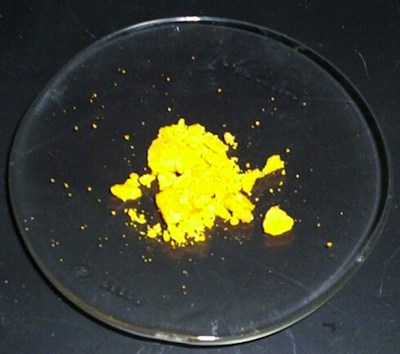 One of our favorite elements is located in group 10 and is derived from the German word for kupfernickel. That's right, we're referring to good 'ole nickel (Ni, Z = 28). It is the 23rd most abundant element and is highly resistant to oxidation.11 Because of this resistance, Ni is often used in coins. The US five-cent piece, the "nickel", was originally made of 100% elemental nickel. Current nickels in production are composed of 25% nickel and 75% copper.14

The last metal we'll get into specifics about is everybody's favorite, gold (Au, Z = 79). Gold is a soft, malleable, yellow metal. It's the 73rd most abundant element on Earth.11 Despite its rarity, gold has been known and used by humans for thousands of years to make jewelry, coins, and other artifacts. Gold was so desirable, ancient alchemists spent years trying to uncover a real-life Philosopher's Stone that would enable them to turn common metals into gold. 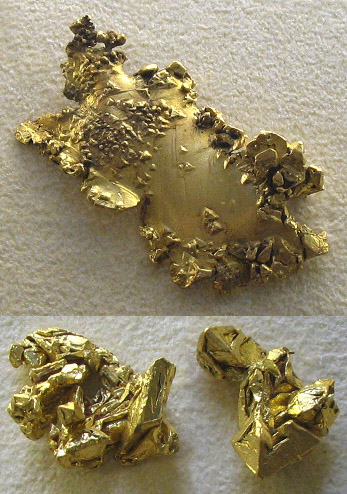 We've only covered a small fraction of the chemistry of the transition metals. If you want to learn more check out this site.

Iron, cobalt, and nickel are the only elements that can produce a magnetic field. Take that, hydrogen.