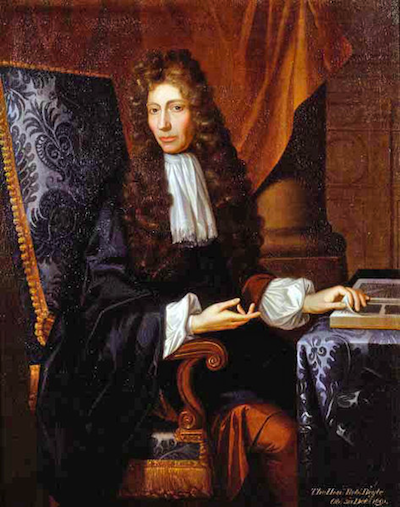 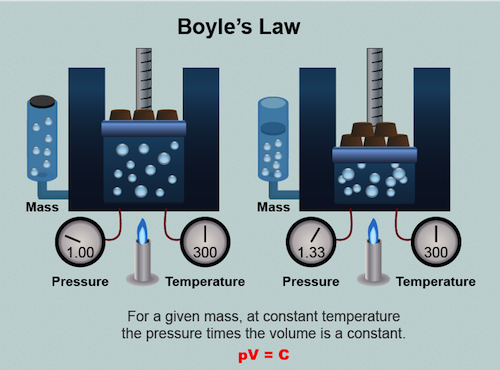 where P is pressure, V is volume, and the value of k is a constant. Notice T (for temperature), n (for number of moles of gas), and C (for cookie) are nowhere to be seen. They don't show up in the equation because they are assumed not to change. Based on the equation for Boyle's law we can conclude with our fancy mathematical powers of deduction that pressure and volume are inversely related to each other, as one goes up the other goes down. The folks over at NASA put together a really nice animation of Boyle's Law in action. Check it out.

A typical plot of pressure versus volume for a gaseous sample can be found here. At any point on the curved line PV = k. Therefore according to Boyle's law and our fancy mathematical powers of deduction we can say that:

This equation will be most useful when solving questions regarding Boyle's law. 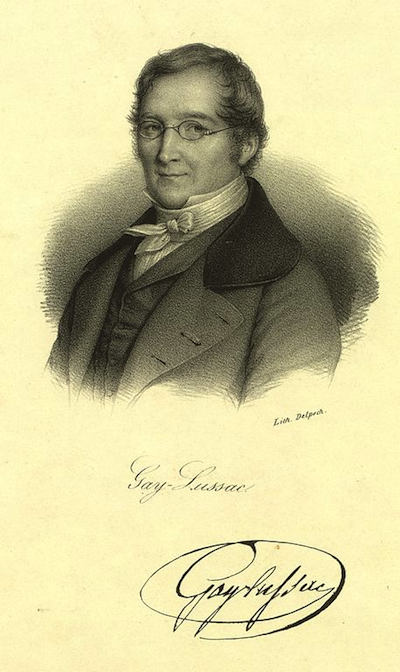 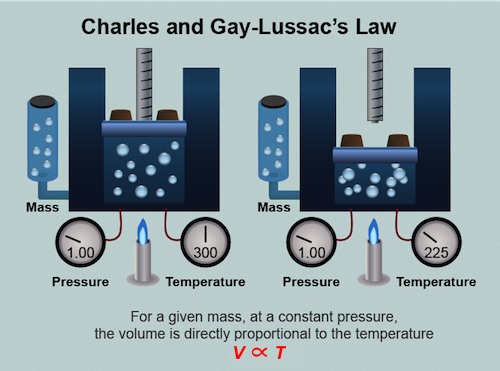 Let's think about this. When we increase the temperature of a gas we are increasing the kinetic energy of the particles and making them more excitable. They are moving faster and jumping around a lot more. The gas particles are also colliding with the container walls more often and with more force. As a consequence, the pressure of the gas inside the container increases. Wait a minute. Didn't we just say Charles' law declares pressure and molar volume are held constant? We did. The greater pressure in turn pushes the container walls outward, increasing the container's volume. Overall the pressure does not change, it remains constant and all is right in the world of chemistry. Check out this neat NASA animation of Charles' law in action.

Charles' law is written as: 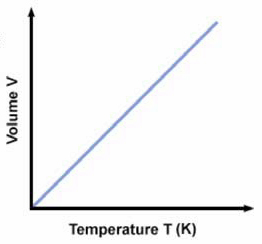 Above is a typical graph of volume versus temperature for gases. At any point on the line V/T = k. Just as we did with Boyle's law we can also say that:

Remember to convert any temperature given in Celsius to Kelvin before solving a problem with Charles' law.

There are a lot of videos that show Charles' law in action. Watch this hot air balloon inflate. As the temperature of the gas inside the balloon is heated with a flame the balloon begins to inflate because the volume is increasing. Or check out this implosion of a metal drum. The drum is filled with a gas. When the gas is cooled the volume decreases and destroys the drum.

(note the pressure is held constant)

Avogadro's law is simple. It states: equal volumes of gases at the same pressure and temperature contain equal number of particles. Mathematically it is expressed:

where V is volume, n is the number of particles, and k is a constant. Historically, the establishment of the relationship between volume and number of particles was a key step in understanding the connection between stoichiometry and atoms or molecules. In a nutshell, one particle of an ideal gas is mechanically no different from any other.

Much as the name implies the combined gas law is a combination of Boyle's law and Charles' law. It states that, for an ideal gas undergoing change from one state (with P1, V1, and T1) to a second state (with P2, V2, and T2) the following equation may be applied:

where P, V, and T mean the usual. You may have guessed n, the number of moles of gas, is assumed to be constant. 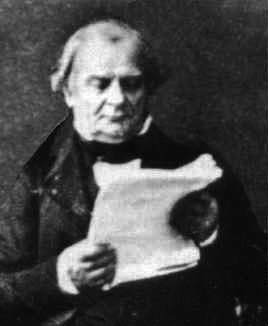 That fine gentleman reading the daily newspaper is Emil Clapeyron.5 He was the first to put all of the above gas laws together into one fancy form that we call the ideal gas law. Here it is in its most simplified form:

The only variable we haven't discussed is R, the universal gas constant, which has a value of 0.082 atm L mol-1 K-1. Notice the pressure unit is in atm. The numerical value for R is different depending on the unit of pressure. A common mistake is to use two different units of pressure when solving ideal gas problems. If a problem gives a pressure in mmHg then either convert mmHg to atm or, if you insist, use the R value of 62.4 L mmHg mol-1 K-1.

This gas law is pretty straightforward. If we have a mixture of gases in a container, according to Dalton's law, the total pressure is the sum of the pressures exerted by each of the gases in the mixture. Here's the equation that just might change your life:

where n is the total number of gases in the mixture. Each gas in a mixture creates a pressure against the container walls called a partial pressure. This pressure would be the same whether there were other gases present or not. That's why we can get the total pressure by summing all of the partial pressures. 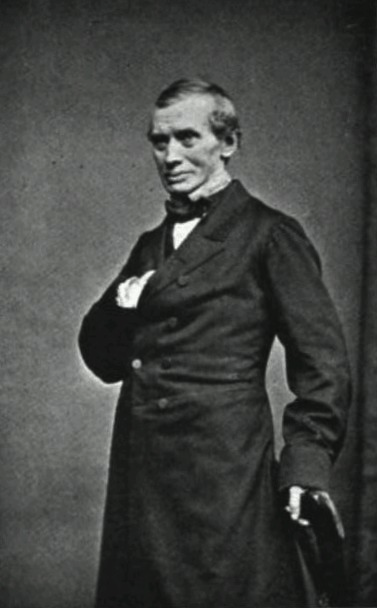 That Graham guy sure was perceptive. He discovered that the denser a gas is, the more slowly it effuses. Effusion is the process in which individual molecules flow through a hole without colliding with another molecule. More specifically, Graham said that the rate of effusion of a gas is inversely proportional to the square root of the molecular mass of the gas molecules.6
Upon comparing the rates of effusion of two gases, Graham also said that the inverse ratio of the square roots of the masses of the two gases' molecules equals their relative rate of effusion. Say what? It makes more sense if you see the equation. Here it is:

"When things get too heavy, just call me Helium, the lightest known gas to man." –Jimi Hendrix