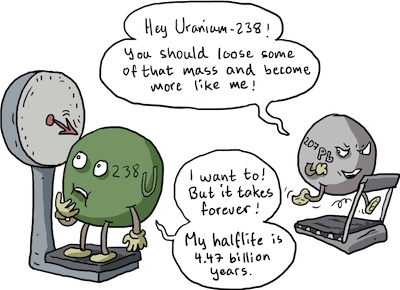 One of the main components of natural gas is methane (CH4). How many moles of CH4 are present in 4.83 g of CH4?

First of all, we are given grams of CH4 and asked to solve for moles of CH4. This means we need a conversion factor between grams and moles. Once again, the periodic table is your BFF. We need to collect the atomic masses of carbon and hydrogen from the periodic table and then calculate the molecular mass of CH4 by simple addition.

Note: we multiply by 4 because there are 4 hydrogen atoms in each CH4.

Therefore our conversion factor is:

To solve we now write:

Jeremias Benjamin Richter (1762-1807) (not to be confused with Andy Richter) was the first guy to lay down the principles of stoichiometry.4 He thought that chemistry could be seen as just another version of applied math. In his own words, "Stoichiometry is the science of measuring the quantitative proportions or mass ratios in which chemical elements stand to one another." You can read more about this brainy dude here.