Another common type of stoichiometry problem on exams and quizzes involves calculating percent composition, which is the percent by mass of each element in a compound.

Suppose a pharmaceutical company needs to verify the purity of a new drug they have made. They first would figure out what the percent composition for each element is supposed to be. Then they would compare that result to the percent composition obtained experimentally. If the numbers don't match, that means the compound is not pure and the chemists have some work to do. 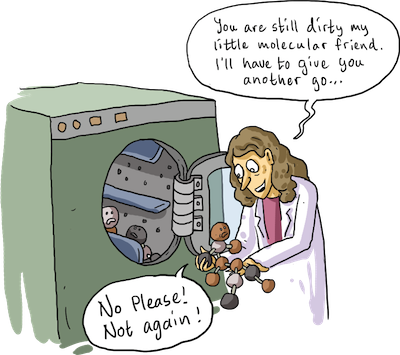 How would we go about calculating this number? We've already learned that the formula of a compound tells us the number of atoms of each element in a single molecule. For example, methane has the formula CH4. In English, that's one carbon atom and four hydrogen atoms.

where n is the number of moles of the element in 1 mole of the compound.

Calculate the percent composition of carbon and hydrogen in methane.

How do we check our percent composition answers? Add up all of the percent composition values. If your answer is not 100%, then Houston, we have a problem. Keep in mind that, due to rounding, the values might not always be exactly 100%; they'll be very close, though.

Speaking of problems, let's try another to make sure we've got the hang of this.

What is the percent composition of hydrogen and oxygen in hydrogen peroxide, H2O2?
First of all, let's calculate the molar mass of H2O2 knowing that the molar masses of H and O are 1.008 g and 16.00 g, respectively.