To Be a Reactant or a Product, That is the Question

So far we've covered all of the basic details that are necessary to understand stoichiometry. The question remains, however. What is stoichiometry, and what does it have to do with molecular weights, molar masses, reactants, and products? 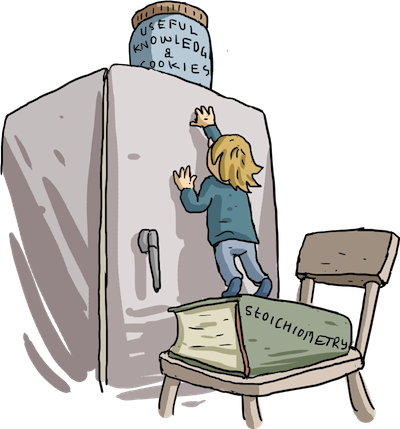 A basic question often raised in a chemical laboratory (or on an exam) is, "How much of product B will be formed from reacting specific amounts of reactant A?" Or the reverse question might be asked, "How much starting material A is needed to obtain a specific amount of product B?" We're here to show you how to solve these types of questions. Whip out your tool belt, and grab the instrument labeled stoichiometry. It is time to get quantitative.

It doesn't matter if the units given for reactants (or products) are in moles, grams, liters, or any other units imaginable. The key to solving stoichiometry problems is to first convert any given unit to moles. Repeat: always convert to moles. From there we use an approach called the mole method, which simply means that the coefficients in a chemical equation can be interpreted as the number of moles of each substance. An example will clear up any confusion. Consider the following equation:

The mole method tells us that 1 mole of N2 reacts with 3 moles of H2 to give 2 moles of NH3. The coefficients are vital in computing stoichiometry questions accurately. That's why it's so important to have a balanced equation. Good thing we're experts. (Basically.)

Let's start off with a simple example using the same above equation. How many moles of NH3 are produced when 6 moles of H2 is reacted completely with N2?

To solve the problem we just started with the 6 moles and used the appropriate conversion factor to give us our answer. The conversion factor we chose allowed us to cancel the units of moles H2.
Now suppose the question was changed a bit: How many grams of NH3 is produced when 16.0 g H2 is reacted completely with N2?

We've already learned in previous sections about the relationship between grams and moles. The key to solving this problem is to convert the given gram quantity into moles, use a conversion factor to get moles of NH3 produced, and then convert that mole quantity into grams. Again, notice that even though our final answer is in grams, we will still use the mole method. There is no way of getting around the mole in chemistry.

Just remember that moles are friendly little guys. If you can comfortably convert to moles and convert moles to other units, you're in business.

What happens when Avatar and chemistry unite?