What do Mary-Kate and Ashley Olsen, Oompa-Loompas, and triangles all have in common? 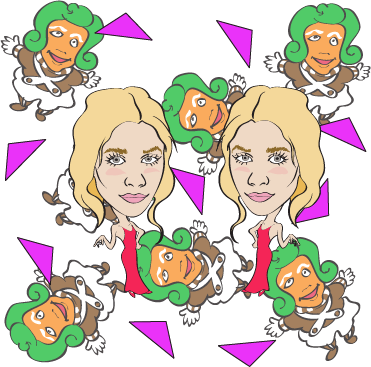 When we say that segments and angles are congruent, we're saying that their measurements are equal. Just the same, two shapes or objects are congruent when they're clones of each other. If you can't tell the difference between two objects, then congruence has done its job.

So, what can be congruent? Segments and angles, as we already know. Identical Olsen twins, evidently. An army of green-haired, overall-wearing, chocolate-concocting midgets, apparently. Triangles, too, but the list doesn't stop there.

Given two triangles, we say that they're congruent if there is a motion we can perform in 3D space so that the triangles are the same—all of the edges have equivalent lengths, and the corresponding angles are all equal.

In the image below, we can see a triangle and its mirror image. If we imagine a hinge along the shared edge, it's possible to flip the top triangle out of the page and onto the bottom triangle so they line up completely. 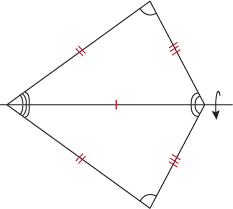 Triangles are also congruent if all we need to do is rotate them until they're identical. We could rotate Oompa-Loompas too, but that involves a lot of heavy lifting, and just because they work with chocolate doesn't mean they smell like chocolate. We'd rather not. 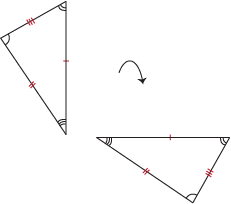 If we come across two triangles, we can check all their angles and sides. If they match up, then they're congruent triangles. That's all there is to it.

We should also talk about the congruence transformations, or different ways to move (and put the moves on) triangles so that we can see that they're really the same thing. With three simple moves, we can seal the congruent deal. 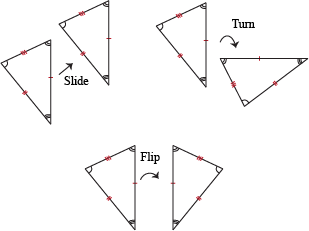 With just a slide (translation), a turn (rotation), or a flip (reflection), we can move triangles around and see whether or not they're congruent. We have to be careful, though, because if we're putting the moves on new triangles, we might make other triangles jealous.

Are the two triangles congruent?

What moves must we put on ∆B'C'A' for it to look like ∆ABC? (In other words, which congruence transformations must we perform on ∆B'C'A'?)

If we slide ∆B'C'A' down a bit, we can see that the two are mirror images of each other. That means we have to flip it over as well. Sliding and flipping are synonyms for translating and reflecting, which are also our answers. By the way, we recommend you try "reflecting" a switch on and doing the Electric "Translation." It's a huge hit at parties.