Triangles on the Coordinate Plane

Just like we've done with everything so far, we can stick triangles on a coordinate plane. We're sure you'd rather send them on a 737 to Abu Dhabi or to the North Pole, but we're stuck with coordinate planes and no jet fuel. Oh well. 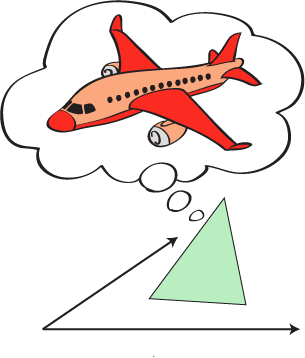 Since a triangle only needs three points, all we need to do is define three points on a coordinate plane, connect 'em, and we got ourselves a triangle. We can pick specific coordinates for specific triangles, whether we want to make them right, isosceles, or equilateral. 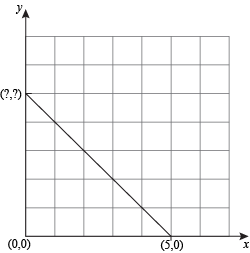 We can see that the third point on the graph will be at (0, 5), but why? We need to create another side that's congruent to and forms a right angle with the side we currently have. If we stick the point on the y-axis, it'll make a right angle with the x-axis. All that's left, then, is to make sure it's congruent. Since the segment we have is a 5-unit long leg (not to be confused with a $5 footlong), we'll make the other side 5 units long, too.

Give the coordinates of an isosceles triangle with a base length of a.

First, we can start with its base. We can place the base of the triangle right on the x-axis to make life easier for us. That means we have two points already: (0, 0) and (a, 0). That's a good starting point.

Now, we need to turn that segment into an isosceles triangle. If the triangle is isosceles, the distance from either endpoint of the base to the vertex (our final remaining point) will have to be equal. That means the vertex must be some distance above the base, but halfway in between each endpoint.

That means our x coordinate for the vertex will be a⁄2. What about our y coordinate? Well, we aren't given any information about that. All we know is that it can't be another point on the base. So let's call it b. That means our vertex is at (a⁄2, b). But a picture is worth a thousand words. That's what we've heard, anyway. 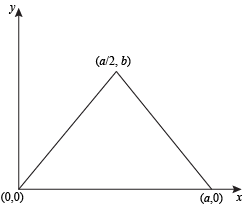 With triangles on a coordinate plane, we can do crazy things like find the lengths of sides. Finding the side lengths of triangles can be useful to us if we want to know whether a triangle is isosceles or scalene. All we have to do is pop the coordinates into the distance formula, and we'll have our side lengths.

That's all good and fine, but what's the big deal about triangles? Why have we been harping on congruence and angles and sides? Well, it's because triangles are very sensitive and they need our constant and undivided attention. Don't judge them; everyone's got their problems.

Aside from their abandonment issues, though, triangles are actually incredibly stable. It's because of SSS. No, they weren't in the Selective Service System. We're talking sides, here.

Remember we saw that three sides completely determine a triangle? That means there is no other triangle (except a congruent one) that can be made with those exact side lengths.

That's not true for polygons with more than three sides. For instance, we can't (and don't) have a theorem SSSS, which would say that any four-sided shape is uniquely determined by the length of its four sides. Why? Well, it's just not true.

Let's consider the example of the square. This is a four-sided shape with sides that all have the same length. Well, it turns out that there are a lot of four-sided shapes that have these four sides.

For this reason, the square is an unstable shape. Imagine if you built a square out of straws and pin joints. What happens if you push on one vertex? The whole thing will collapse if you push hard enough.

However, this is really simple to fix. If we take our four-sided polygon and add in a diagonal, we'll have two triangles. These are the only triangles that can be made, according to SSS. So now, you can push on this square any way you want, but it won't budge!

Now that each square is made up of a bunch of triangles, it's as stable as can be—and it's all thanks to the SSS quality of triangles. It's also the reason that we use triangles to build bridges and skyscrapers and homes and schools and cars and airplanes.