Gaussian elimination. It sounds terrible, and that's why most people run the other way when they see it coming. Not us. We're awesome like that. We are going to teach you that it's just a small extension of the elimination method in solving systems of equations (from Algebra 1 and Algebra 2), but with a few extra tricks called row operations.

Learning about Gaussian elimination will give you the capability of solving many variable (multivariate) systems. If you like a challenge, you are in for a treat. A Gaussian treat, that is.

We have been studying on the intersection of two lines in a 2-dimensional plane. Did you know that an equation that looks like this:

...is not a line. It's a bird. It's superman. Okay, it's actually a plane. Think about 3D space. Look around right where you are sitting. Remember back to Geometry when we learned that three points determine a plane. Pick three spots in the space in front of your face. Each of those points in the space floating in front of your face have an x, y, and z coordinate. Now picture laying a piece of paper right on top of those three points. The equation above actually defining a plane in space.

Check out the plane that was defined in the 3D equation above: 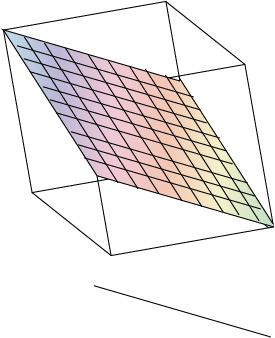 Solving equations with more than two variables are called multi-variate systems of equations. Try to remember that all we are trying to find is the coordinate in which these equations intersect.

Solve this system of equations by the substitution method:

Our point of three intersecting planes is at (8, -2, -2) which is the solution to our multivariate system of equations. 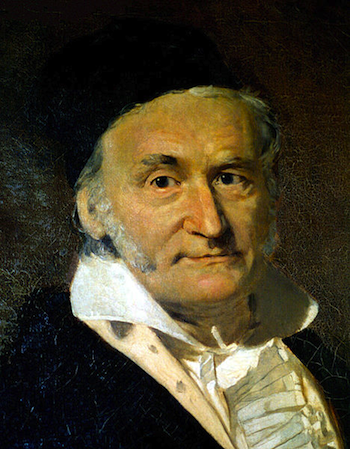 By the way, you can thank the handsome guy above, Carl Friedrich Gauss, otherwise known as the "Prince of Mathematicians." It was not that long ago (early 1800's) when he was responsible for this wonderful method for solving multivariable systems of equations.

Our goal is to get the system of equations in triangular form. In Gaussian elimination, we can multiply any of the equation by a number, and add it to another equation and still preserve the set of equations. So our first step here will be multiply Row 1 by -2, and add it to Row 2 as shown below:

If we now add our Row 2 and our Row 3, the y variables will cancel out.

Finally, let's write our system of equations in triangular form:

Step 6: Collapse on the floor and curse Gauss.

Previous Next
More on Systems of Equations Navigation