The Fundamental Theorem of Calculus - Integrating the Velocity Function

When Velocity is Non-Negative

Again, let's assume we're cruising on the highway looking for some gas station nourishment. We could actually figure out the distance we've travelled by knowing our velocity and the time we spent searching.

We can only use the formula

if velocity is constant on the time interval we're looking at. If we graph time on the horizontal axis and (constant) velocity on the vertical axis, we get this picture: 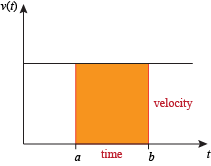 20 minutes is one third of an hour, so

(or on any other interval of length

If we want to get a better estimate of distance travelled, we can split up the time interval into sub-intervals and pretend that velocity is constant on each sub-interval.

Suppose Jen's velocity in mph was measured every ten minutes for one hour, and that her velocity was decreasing over that hour. The recorded values are shown in the table below. Estimate how far Jen travelled during the hour.

In real life her velocity would probably look something like this 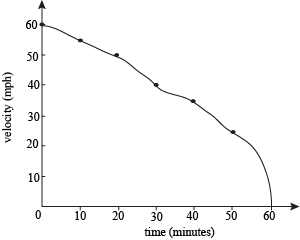 but to make the problem easier we're pretending her velocity looks like this: 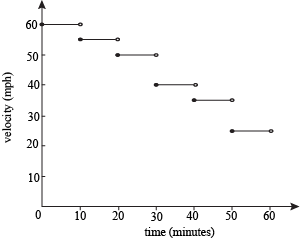 on each ten-minute sub-interval, we estimate that

Adding up the estimated distance for each 10-minute sub-interval, we estimate that over the full hour Jen travelled

On each sub-interval we're approximating Jen's velocity. She wasn't going 60 mph for all of the first ten minutes, so this answer is an estimate of how far Jen actually travelled.

In the example above, what we really did was use a left-hand sum with 6 sub-intervals to estimate

The upper limit of integration is 1 because the function v(t) expects t to be in hours. 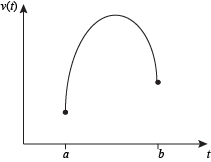 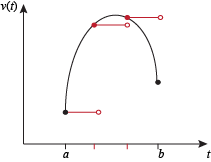 then the area of the rectangle on each sub-interval is our estimate of how far the cheetah or snail or whatever has travelled during that sub-interval. 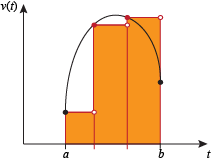