The Second Fundamental Theorem of Calculus

As if one Fundamental Theorem of Calculus wasn't enough, there's a second one. The first FTC says how to evaluate the definite integral

Given a continuous function f and a constant a, we can define a new function F(x) by integrating f from a to x:

We can think of this new function F as an accumulation function—it accumulates the weighted area under f from a to x. 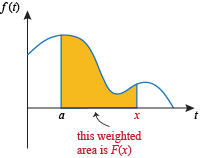 Given a continuous function f, we can build a new function F(x) by picking a lower limit of integration a and integrating f from a to x.

The Second Fundamental Theorem of Calculus says that when we build a function this way, we get an antiderivative of f.

Assume f(x) is a continuous function on the interval I and a is a constant in I. Define a new function F(x) by

That business about the interval I is to make sure we only get limits of integration that are are reasonable for your function. Some things that wouldn't be reasonable:

We can condense this discussion into a short warning.

Be Careful: Whenever you go to evaluate an integral, make sure the limits of integration are reasonable for the function you're integrating.

If a function is discontinuous at or between the limits of integration we may still be able to evaluate the integral, but it requires a little extra sneakiness that we haven't gotten to yet.


So far, we've used the second FTC to build antiderivatives for things we already have derivatives for. That's not very exciting. Why go to all the trouble of writing

to get an antiderivative for sin x, when we already know that

is an antiderivative of sin x?

for example - not just because we don't know how, but because it can't be done.