The Fundamental Theorem of Calculus - Units

Velocity is the rate of change of distance, and is measured in

When we integrate velocity over a specific time interval, we get the distance traveled over that interval.

can also be defined as the limit, as n goes to ∞, of the left-hand sums LHS(n) for v(t) on [a, b]. To find a left-hand sum we add up the areas of a bunch of rectangles. Check out one of those rectangles. The general case is on the left; a specific example is on the right.

The height of the rectangle is measured in the same units as the velocity function, that is,

The width of the rectangle is measured in the same units as x, that is, units of time:

We find the area of the rectangle by multiplying its height and its width:

units of area = (units of height)(units of width).

In the case of the velocity function, this means 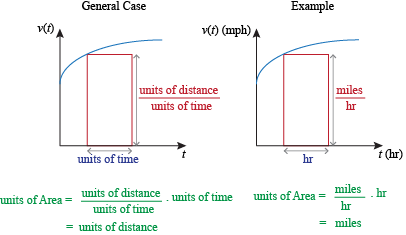 are the same as the units of f.

Things get a little weirder when we integrate functions that aren't obviously rates of change. Not harder, just weirder. If f(x) is continuous on [a ,b], we can integrate it, even if f is measured in wombats. Assuming x is still measured in meters, what are the units of

which is equivalent to

The units of x cancel out and we're left with the units of f, as we expected.