We'd like to introduce a couple of new words to help us talk about limits. If you're rusty on how limits work, we recommend reviewing them.

When a limit exists and equals L, we say that limit converges to L. The phrase "converges to" means the same thing as the word "approaches."

Sometimes we say a limit converges without bothering to say its value.

When a limit doesn't exist, we say that limit diverges. The limit

These integrals are accounting for the area between the graph of

and the x-axis on intervals whose right endpoint is 1 and whose left endpoints are moving closer and closer to 0: 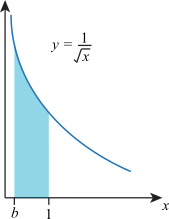 As b approaches 0, the area

approaches the total area between the graph of

In symbols, the total area between

We abbreviate this limit by

looks like a normal definite integral, it isn't, because the integrand has an asymptote at one of the endpoints, x = 0.

is undefined at x = 0, there's something weird about

We aren't looking at a normal definite integral here. There's something improper about it, which leads to our next important definition.

Improper integrals are limits of definite integrals. The integrals

are examples of improper integrals.

There are two types of improper integrals. In the first type, the limits are badly behaved (that is, ∞ or -∞). Such integrals would look like one of these (c is a constant):

In the second type, the functions are badly behaved. These integrals will look like normal definite integrals

but somewhere in the interval from a to b a vertical asymptote will be lurking, as the function zooms off to infinity!

From now until the end of calculus, whenever you're asked to evaluate an integral, first ask yourself if that integral is improper. Just because the expression

is written down, it doesn't mean that expression has a numerical value!

is the area between

is the area between

When an improper integral of a non-negative or non-positive function diverges, it means the area described is infinite.

Now let's look at the two types of improper integrals in a little more depth.