We make several kinds of statements every single day. Some of them are simple expressions of fact. You might say, "I'm going to Disneyland today!" or, "My favorite ride is Space Mountain!" or, "I have nightmares about Mickey Mouse hacking me to pieces with a butcher knife!" Hopefully that last one isn't an expression of fact.

On the other hand, conditional statements (or implications) are a bit more complicated. They often have the form "If hypothesis, then conclusion." For example, "If Pirates of the Caribbean is closed, then we should try the Haunted Mansion," and, "If we stomp on Mickey's foot, then security will escort us out of the park," are conditional statements.

We may or may not be thrown out of Disneyland, but once the hypothesis (or condition) of stepping on Mickey's foot is met, our fate is sealed. Let's just hope he left his butcher knife at home or our nightmare might become a reality. 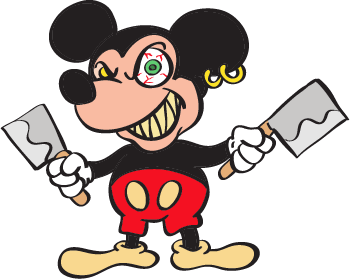 These statements play a large role in mathematics as well, and it's important to recognize their precise meaning. Take the following statement: "If a number ends in 0, then it is divisible by 2." This says nothing about numbers that do not end in 0; they may be divisible by 2 (for example, 4) or they might not be (like 5).

Suppose the statement "If you are under 16 years old, then you may not drive" is true. It is in most states, so we might as well go with it. Determine which of the following are consistent or inconsistent with this statement.

Both (A) and (C) are automatically consistent with the statement, since in both cases the hypothesis of being under 16 years old is not met. They're older than 16, so we don't care about them.

In (D), Rob meets the hypothesis since he is 10 years old, and he also satisfies the conclusion of not driving, so (D) is consistent. Good thing too, since we don't want ten-year-olds on the road. Celine, on the other hand, is a counterexample because she meets the hypothesis but does not meet the conclusion. Consequently, only (B) is inconsistent with the general statement.

Previous Next
More on Logic and Proof Navigation