Parallel Lines is Blondie's third album. Who's that? Seriously? Blondie was breaking hearts of glass way before Gaga got her blonde on.

The album cover is rockin' some stripes. Maybe that's where they got the title. Aside from the obvious influence that parallel lines have on everyone and everything, we mean.

Parallel lines are coplanar lines that never intersect. If pictures are overkill, you can use the symbol || to get the job done. So in the image above, we could say, "Line DE and line PQ are parallel," or we could just write DE || PQ. Of course, drawing the lines out is always an option too.

What about the other types of lines out there? Lines that lie on the same plane and do intersect are called intersecting lines. Really creative, we know. We'll talk about intersecting lines a little later, so don't get your panties in a bunch.

Lines that lie on different planes and never intersect are called skew lines. They aren't perfectly in sync like parallel lines but they don't clash like intersecting lines either. They kind of just go about their own business separately, never meeting or even acknowledging one another.

To show that lines are parallel in drawings, it's common to draw an arrowhead or two on the parallel lines. Just like tick marks are used to indicate congruent segments, these arrowheads clarify which line is parallel to which other line.

Which pairs of lines are parallel? 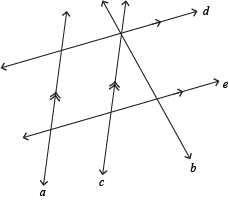