Parallel lines are pretty special, but they tend to lose their luster really quickly. Two lines that go on forever without even meeting gets a bit dull, not to mention kind of depressing. Just imagine if Marshall and Lily had never gotten together, if Ross and Rachel had been on a break, or if Harry had never met Sally. Cue uncontrollable sobbing. 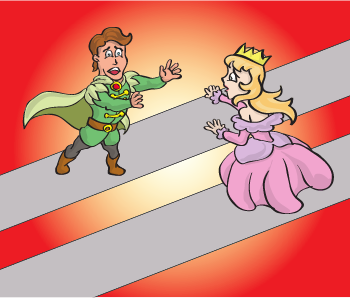 Well, parallel lines aren't like most couples. All relationships have their problems, but parallel lines just keep chugging along perfectly. A little too perfectly, if you ask us. So to keep things interesting, let's throw a monkey wrench into all of this and see just how strong their relationship is. Get ready for some drama.

A line that intersects a pair of parallel lines is called a transversal. Think of it as the third wheel in a love triangle, like Jacob complicating matters between Edward and Bella. It makes things interesting, but a little hairy. (Literally, since Jacob's a werewolf and all.)

Ready for a truth bomb? When a transversal intersects two or more parallel lines, the two pairs of vertical angles formed at every intersection are the exact same. We know. Mind blown.

If two angles are in the same position compared to the transversal and one of the parallel lines, we call them corresponding angles. In the figure above, ∠1 and ∠5 are corresponding. So are ∠2 and ∠6. Just the same, ∠3 corresponds to ∠7 and ∠4 to ∠8. You get the picture.

Why, you ask? Since parallel lines have the same slope and a line always has a constant slope, it only makes sense that they intersect at the same angle measurement.

Name all pairs of corresponding angles in this figure. 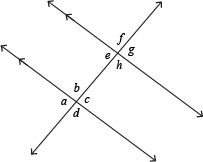 You hardcore scientists out there are probably shifting in your seats. This congruence business is all good and fine, but it doesn't tell us anything about what these measurements actually are. You want real numbers you can see, and we don't blame you. If there's anything math is good at, it's numbers.

We can start by using what we already know. What should angles ∠f and ∠g add up to? Together, they make a straight angle, which means that if we add m∠f + m∠g, we should get a straight line. The term "supplementary" should be shining in neon lights inside your brain, possibly with the numbers 1, 8, and 0 doing a flashy burlesque number. 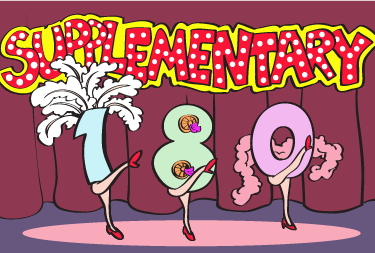 Oh, is that just us?

Don't forget another critical part of any two intersecting lines: vertical angles. Since both vertical angles and corresponding angles are congruent, we can figure out all eight angles simply by knowing one of them!

Hold up. That means ∠4 and ∠6 are congruent to each other as well? But they're neither vertical nor corresponding. If they're congruent (which they are), then they'll need a name. But what's in a name? That which we call a rose by any other—okay, we'll stop.

Of course, it doesn't take long to see that ∠2 and ∠8 are also congruent, but they're neither corresponding nor vertical, either. How about a name for them, too? We'll go with alternate exterior angles, for reasons that we hope are obvious to you.

First, let's take a gander at this pretty little picture. Clearly, ∠1 and ∠2 aren't vertical or corresponding. You might be tempted to say that they're alternate exterior angles, but they're on the same side of the transversal. So what are they?

Remember those flashy numbers 1, 8, and 0? Well, they're back for an encore.