We've covered a lot of geometric ground already, but we still haven't paid proper tribute to the guy who got us into this whole mess. Let's all give a big thank you—yes, a thank you—to Euclid of Alexandria. Cue thunderous applause and a few rogue tomatoes thrown by disgruntled geometry students.

It's sort of a miracle we haven't talked about him yet, since he's basically the father of modern geometry. He practically invented geometry back around 300 BCE. Well, not all of it, and he didn't exactly invent it. But he gathered up all the useful stuff that folks had been talking about for a while and presented it in a pretty comprehensible way. So really, Euclid was the first to Shmoop geometry and we're just following in his footsteps. Only with funnier jokes and more pop-culture references. (Sorry, buddy. A lot has happened in the last 2300 years.) 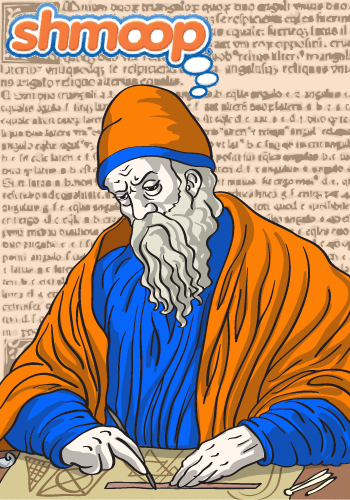 One of the many things Euclid did was start out with a bunch of basic postulates about the nature of geometry. Remember when we talked about postulates a little while ago? Those bad boys will come back to haunt you. And when they do, who you gonna call? Not Ghostbusters, that's for sure.

Euclid talked about five basic postulates. The first three talk about lines, line segments, and circles. The fourth says that all right angles are equal. Well, yeah. A 90° angle is the same as a 90° angle. Thanks, Captain Obvious.

Then, we get to Mambo No. 5, the parallel postulate. It's not neat and simple like the others, and it can't really be proven. Mathematicians have even shown that there are weird types of "non-Euclidean" geometry where the parallel postulate isn't true. It's like Geometry in Wonderland, and we'd suggest not going down that rabbit hole just yet.

The original version of the parallel postulate goes something like this: if a straight line that crosses two straight lines makes two angles on the interior whose sum is less than the measure of two right angles, the two straight lines will intersect on the same side as those angles. 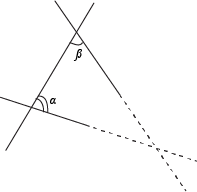 Are your eyes crossed yet? Because ours totally are.

Basically, it all boils down to that transversal thing we were talking about earlier. Let's say we have two lines and another line that crosses both of them, like in the picture above. Let's also say that ∠α and ∠β add up to a number that's not 180°, the sum of two right angles. What Euclid is saying is that eventually, the lines are going to intersect somewhere, sometime. If they do add up to exactly 180 though, then the lines are actually parallel.

Are u and v parallel? Why or why not? 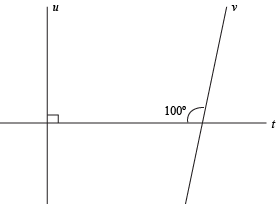 We can also use the fact that perpendicular lines make 4 right angles and say that since neither corresponding angles nor alternate interior angles are congruent, then lines u and v aren't parallel.

How can we use the parallel postulate to prove that ∠1 ≅ ∠5? 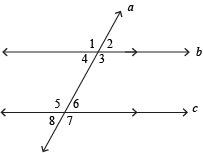 The parallel postulate might be confusing, but it does say that if two lines (namely, b and c) are crossed by another line (namely, a) and the measure of angles ∠4 and ∠5 are less than 180° (the sum of two right angles), then the lines are not parallel.

Whaddayaknow? Both m∠5 and m∠1 equal 180 – m∠4. By virtue of either the transitive or substitution properties, we can say that m∠5 = m∠1. Based on the definition of angle congruence, we can say that ∠5 ≅ ∠1. Really though, we just proved what we already know: corresponding angles of parallel lines are congruent.