It's a hot summer evening. Bob has been training for a triathalon and needs a major calorie intake. He finished his dinner of pizza and hot dogs, but he still has room for dessert, so he eyeballs that key lime pie his neighbor brought over for him yesterday.

He walks over to the counter, licks his lips, and picks up a knife. He drives the knife right into the center of the pie and makes a cut. He turns the pie, places the knife in the center again, and cuts himself a heathy-sized wedge. 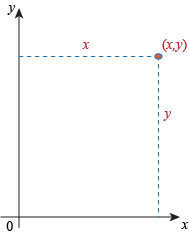 We can also describe the position of a point using polar coordinates of the form (r, θ). Polar coordinates are closely related to vectors. Instead of listing the x and y components of a vector we list its magnitude |r| and its direction θ.

To graph the point whose polar coordinates are (r, θ), first draw a ray from the origin with angle θ from the positive x-axis: 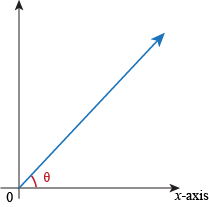 If r is positive, start at the origin and travel a distance of r along the ray: 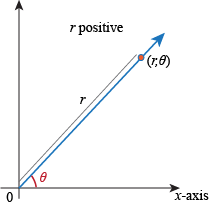 If r is negative, start at the origin and travel a distance of |r| in the opposite direction: 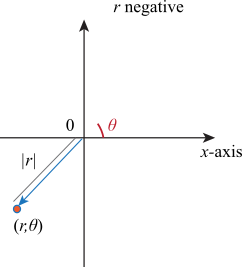 If we know the angle θ and whether r is positive or negative, we know which quadrant the point (r, θ) can be found.

In order to make polar coordinates more digestable, make sure we're comfortable thinking about angles in radians. The next time someone asks how much pie you want, tell them you want

radians. It would also be helpful to review the unit circle, since polar coordinates are sort of an extension of the unit circle. It's no coincidence, seeing as pizzas and pies are shaped the same way.

can be described by the polar coordinates 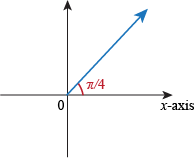 It can also be described by the coordinates

for any integer value of n. Every time we add 2π, we go around the circle and end up where we started: 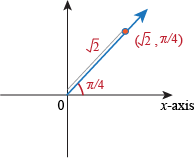