Recall that functions are much like computers or machines that take in one or several input numbers and put out a single number. And recall that vectors are mathematical entities composed of two pieces, magnitude and direction, like the mythological minotaur.

Now imagine trying to back the minotaur into a corner and shove him into your computer program/function machine, where he'll be torn to shreds and something else will come out. Talk about a mess.

There are also functions whose input consists of multiple numbers (or a vector), while the output is still one number. In cases like this, the minotaur becomes an ordinary mouse, composed of a single, tame animal.

Since this function takes two real numbers and gives back one real number, we say f:ℜ2→ℜ

This is the same thing as taking one 2-dimensional vector as input:

A vector function can also take in vectors as inputs and produce vector outputs. A griffin plus a minotaur equals a griffotaur.

Be Careful: Whether a function is a vector function or a scalar function depends on the output of the function, not the input.

Pretend a mountain is sitting on an x,y coordinate grid: 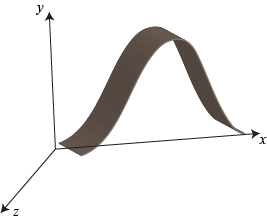 The function that takes a point (x, y) on the grid as input and gives the elevation of the mountain at point (x, y) as output is a scalar function. 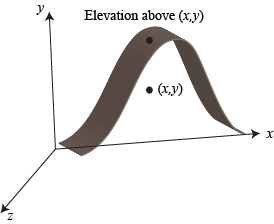 This function is closely related to contour maps.

Now Impose a 3-dimensional coordinate grid on a room.

There's a scalar function that takes a point (x, y, z) in the room as input and outputs the temperature at that point in the room. 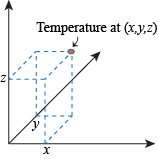 The function that projects a vector onto its x-component is a scalar function:
fx(x, y) = x

As is the function that projects the vector onto its y-component:
fy(x, y) = y

Put a coordinate grid over an etch-a-sketch.

The function whose input is t and whose output is the point (x(t), y(t)) is a vector function. This idea will be useful when we get to parametric equations.