Points, Vectors, and Functions - Vectors: A New Kind of Animal

Vectors: A New Kind of Animal

Imagine we're walking down the street after a tasty supper. We look to our left, and we sight a minotaur ambling down the street with a cup of joe in hand. Distracted, we trip over an overgrown root breaking through the sidewalk. Clumsy us. We land on our backs, only to see, of all things, a griffin flying high overhead. We squint, wondering if our lunch was poisoned, and try to make sense of what we've seen. 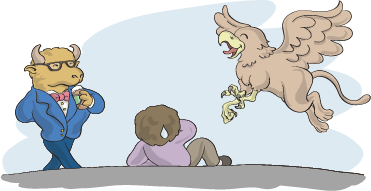 Of course, like any studious scholars, we run home and look up what we saw on Shmoop, and realize that the Minotaur is a harmless half man, half bull, while the griffin is an eagle/lion hybrid out for a post-evening joy flight. It clicks: we saw single, harmless creatures each composed of two animals.

Turns out this is a good way to think about vectors. They are mathematical objects composed of two, easily recognizable parts, magnitude and direction.

Velocity is a vector, since it has magnitude, or the speed, and direction. "60 miles per hour due east" is a velocity.

Speed is not a vector. It has magnitude but doesn't include a direction. "60 miles per hour" is a speed, not a velocity.

We can visualize a 2-D vector as a line segment with an arrow on one end:

The head end shows which way the vector is going. Like animals and arrows, vectors travel head first.

The components x and y of the vector are like the Δ x and Δ y we use when discussing slope. To get from the tail to the head of the vector

When visualizing a 2-D vector as a line segment with its tail at the origin,

We'll go into more depth about magnitude and direction shortly.

For any point P in the xy-plane, we find a corresponding vector by drawing an arrow with its tail at the origin and its head at P.

For any 2-D vector

We can also say, "there's a one-to-one correspondence between 2-D vectors and points in the xy-plane."

Unless there's a good reason not to, we usually assume a vector has its tail at the origin.