To add polynomials, all we do is combine like terms in the same way as we would with any other expression. Sorry, we know you were probably hoping for something new and wildly different, but you'll need to settle for doing things the way you already know how. 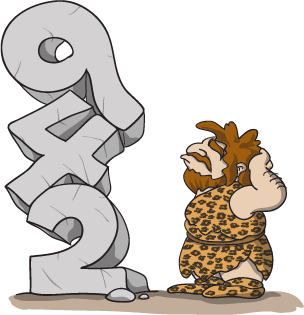 Quick flashback: Remember how, back in the Jurassic period when we didn't have access to calculators, we used to stack up whole numbers in order to add them, like this?

We can do something similar with polynomials. We stack the polynomials on top of each other so that terms with the same degree line up vertically. This can help us keep track of all the terms. It can also help us maximize our closet space.

Then, add down each column:

If you like the vertical stacking, go for it. If not, forget we mentioned it. When adding polynomials, use whatever method works for you. Just remember to combine like terms. Don't go crazy and add together everything you see regardless of what degree they are. That's plain irresponsible.

This is equivalent to:


After distributing the (-1), the original subtraction simplifies to:

Notice that we now have a positive 12 at the end thanks to that whole "double negative" thing. We no longer need the first set of parentheses, so we can get rid of them...real quiet-like...

A common mistake in subtracting polynomials is forgetting to subtract every term and instead only subtracting the first term. Forgetting leads to things like milk in the pantry and ketchup on your salad, so here's a way to help: it's called the "flip and add" method. First, we flip the sign of every term in the second polynomial to find a new polynomial. Then we add that new polynomial to the first one. This helps us to remember that when we subtract a polynomial, we subtract every term, not only the first one. It's like shampoo and conditioner in one, except more useful on a math test.

Previous Next
More on Polynomials Navigation