We're starting to get pretty good at evaluating limits. Too bad that things are going to get a little harder from here on. Not quite "evade the man-eating llama" levels of difficult, but still. 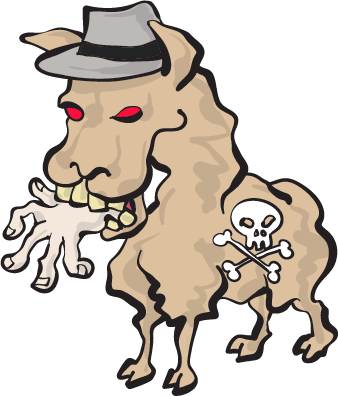 See, we've actually been walking around a bunch of landmines without realizing it. We started talking about it in the last section: the dreaded division by zero. It gets even worse, though. Sometimes we have division of zero by zero. That's like a landmine with another landmine on top of it.

Don't worry, though, because we have the techniques that will make you an explosion-proof Shmathematical mastermind.

We start out, just like usual, with direct substitution. Unfortunately, that doesn't get us much of anywhere.

Trouble. We can't divide by zero or the world, as we know it, will cease to exist. This limit evaluates into what we call an indeterminate form. In non-mathy-math terms, we can't determine what this limit is up to or where it is going. Direct substitution, our rock, has failed us.

What can we do? We'd like it if we could rearrange the function so that we no longer have division by zero. We'd love it if we won the lottery, but that seems unlikely. So instead, take another look at the function and notice that the numerator can be factored.

Good news, everyone. We got rid of the zero in the denominator, so we can go ahead and evaluate the limit normally. It's easy, and less filling too.

As x approaches -1, the function approaches -2. However, we know the function is undefined at x = -1, because of the whole division by zero thing in the original equation. That's what messed up our direct substitution at first.

Factoring helps deal with a lot of situations where there is an indeterminate form. It won't always be so easy, though.

We can just feel the tension rising with this problem. A quick check shows that when we put in -2 for x, we get

. This is an indeterminate form, so we need to try something else.

Here's the catch—and where the stress levels start to elevate—the numerator is not easily factorable. Hopefully, you'll remember the rules for factoring the sum of cubes, or else you're in for the long haul of polynomial division. Sorry, but even at the tail end of Precalculus, we can't escape Algebra's grasp.

Either method gets us the same result.

Guess which problem has two thumbs and just became way easier. This one. Actually, we're not so sure about the thumbs. Whatever, let's divide out and solve this thang.

As x approaches -2, the function approaches 12. The stress is just melting out of us. We don't suggest touching it; it's still hot.

when we directly substitute. Un-be-lievable.

In order to take care of this little problem, we're going to multiply by the conjugate. No, we're not taking about what you do to verbs in order for them to agree with the subject in a sentence. That’s grammatical conjugation. We're talking about the algebraic conjugate.

To create the conjugate, we simply need to flip the sign of the second term of our radical's resident binomial.

Is this looking familiar? What we've done is just multiplied our limit by a big ol' 1. This means we haven't changed the value of the limit. We just messed with its look a little bit. Now to simplify and see if this will take care of that pesky denominator.

We're close, but not quite there. We still have an x in the denominator, multiplying everything else, that will mess things up. However, we're not done simplifying either. Let's cross out the x's.

Now we no longer have division by zero when we sub in x = 0.

We've once again pulled a defined limit out of an at-first undefined hat. And we managed to do it without exploding. Some people would say that is a low bar to clear, but we don't care. Any day we don't explode is a good day.

Up until now, direct substitution has been giving us two zeros, one on top of the fraction the other in the bottom. Wouldn't life be a lot easier if we only had one zero instead?

Not always. Sure, if zero shows up in the numerator, then the limit as a whole will be zero, too. Then we can call it a day and go back to napping the afternoon away. Zeros down south complicate things, though. But not nearly this complicated.

Direct substitution is obviously going to get us nowhere. What we'll do instead is plug in numbers really close to our limit. This is usually the easiest way to see how it behaves.

When we said really close, we meant really close. The function get big coming from the left or the right. And we mean BIG. We mean infinitely BIG. Both sides of the limit agree that it is approaching infinity as x approaches 0. 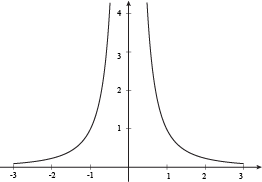 The graph tells us the same thing. Now, if we had been looking for

instead, we would have run into trouble. From the left, our negative numbers would have led down to -∞, while to the right of zero they would have shot up to +∞. We always have to look both ways before crossing the division by zero.