One-sided limits are crucial. They are to limits in general as LeBron James is to, well, every team he plays for. Without one-sided limits, limits themselves couldn't exist. This ends up being a bit of a chicken versus egg situation, so we went with overall limits first. Just because. 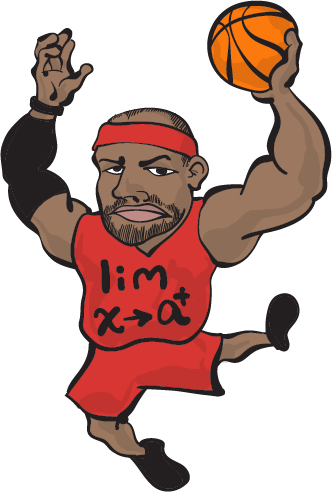 Now it's time for the meat and potatoes. The biggest, and perhaps only difference from before is that we'll only be discussing what happens to a function as we approach a value from either the left or right. We will let you know the direction with a little "-" or "+". Like this:

That's no moon…er, that's not an exponent. It's how we say "approach this limit from the left side only."

The best part is that we can treat these limits a lot like regular old limits. For the most part. In some ways, they are even easier to use.

Enough discussion: time to evaluate this thing. If we go ahead with direct substitution, we can find the overall limit easy as pie.

If the limit is defined on both the left and the right, then it's the same value when we look on just the left. We would say that is just common sense, but hey, this is math. Sometimes it surprises us.

This limit raises the difficulty a bit. We no longer have a function whose domain is all real numbers. In fact, x = 3 is at the very edge of the x-values we are allowed to put into this thing. Let's look at the graph.

What a radical sunset. We can see that 3 is at the far end of the domain for this semi-circle function. Luckily, we are approaching 3 only from the left, so we can evaluate this limit. We'll do so by using direct substitution, like usual.

This is our answer:

. Now, if the limit had asked us to approach 3 from the right instead, or from both directions, we couldn't do it. That's no-man's land out there. The answer then would have been that the limits Do Not Exist.

We've got a piecewise function on our hands, and the pieces join together right where we want to check out the limit. And hey, we need to find the limit at x = 2, not just from the left or the right. So why is it in this section?

Don't worry; we know what we're doing. Also, we know what you're doing, or at least thinking about doing. Shmoopy psychic power, activiate. You were thinking about saying, "The function equals 0 at x = 2, so by direct substitution, that means the limit is 0." Sorry to burst your bubble, but BZZT, that's wrong.

Remember, we want the limit as x approaches 2. The function can be whatever it wants exactly at 2, but what matters are the values as x gets very close to, but not quite, 2. 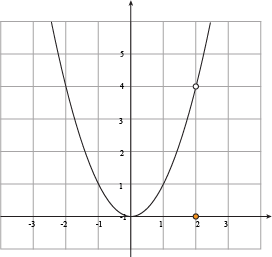 Looking at the graph makes it more clear what's going on. The function approaches x = 2 by way of x2, so that's where we'll use direct substitution. And we have to do it from the left and the right side, although they are the same in this case.

At this point, we hope that you're confident about using direct substitution and saying this limit is 0. If not, well, get some practice in to help you work out the kinks.