Sequences - Convergence and Divergence of Sequences

Convergence and Divergence of Sequences

Now calculus rears its not-so-ugly head. Sequences are like bulls at a rodeo waiting to be lassoed, but the divergent ones can't be caught. Let's make sure we're comfortable with limits, and let's see which sequences we can stop.

In some of the sequences we graphed, it looked like as n got bigger the values an approached some particular value. 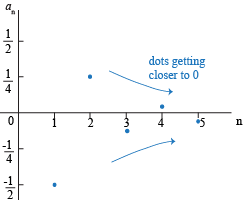 . This is just like convergence for functions. These are the bulls we can wrangle.

If we look at a convergent sequence on a number line, it looks like the dots are getting closer and closer to value L.

converges to 0. The dots are trying to get to 0 on the number line.

If we look at a convergent sequence on a 2-D graph, it looks like a function with a horizontal asymptote. The dots will get closer and closer to height L as n gets bigger.

converges to 1. As n gets bigger and we move to the right on the graph, the dots get closer and closer to height 1.

Just like a function, if a sequence doesn't converge, we say it diverges. Sequences can diverge for different reasons.

The sequence an = n diverges because as n approaches ∞ the terms an approach ∞ also. Since the terms aren't getting closer to anything finite, we say the sequence diverges. This is the bull that gets away from you before you can lasso it.

The sequence an = (-1)n diverges because it's indecisive and can't make up its mind whether to be + 1 or -1. This is the bull that catches you and throws you over it's head using its horns. You'll get up, try to wrangle it, and it'll just throw you over its head again.

To determine if a sequence converges or diverges, see if the limit

exists and is finite. For the sake of intuition, it may be helpful to graph the sequence.

Previous Next
More on Sequences Navigation