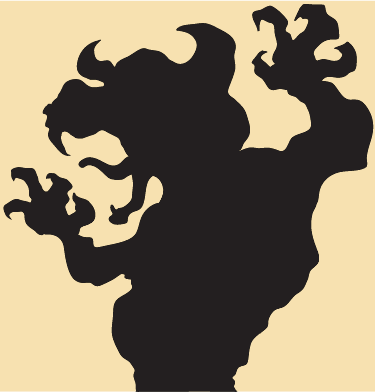 Hey, chill. Take a deep breath and look at the bigger picture, and you'll see that the monsters of geometry aren't quite that scary. 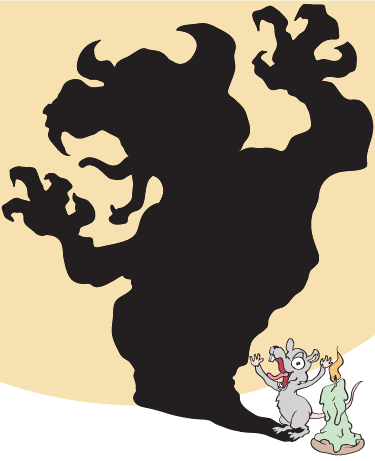 The world is full of plenty of transformations, processes that change a shape in one way or another. Some of the time, we end up with a shape that's the same size and shape as the one we began with. Translation, reflection, and rotation are all this kind of creature.

Dilation is a slightly different monster. While the other transformations give us a congruent shape, dilation changes the size of the shape being transformed—proportionally, of course (after all, we're still in the chapter about similarity).

It's kind of like those shrinky-dink art projects you made with when you were younger. You know, you drew on a special piece of plastic, your mom put it in the oven, and seven minutes later you had the same thing, only in miniature. Dilation can reduce a shape proportionally so it's just a cute little version of itself. Of course, dilation can also enlarge a shape proportionally resulting in a giant monster version of itself. Just make sure the lever is pointing the right way.

Like every other topic in geometry, dilations believe themselves important enough to have their own distinct vocabulary. Look back at the picture of the mouse. The candle is the center of dilation, the mouse is the preimage, and the shadow is the resulting image under dilation. 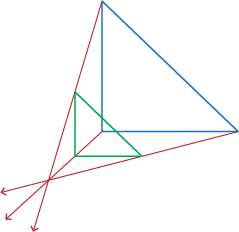 Notice anything? Hopefully you noticed that the three rays all intersected in a single point. Hey, you're right. That point is the center of dilation.

The center could be located some distance away from the two shapes, like in the triangles above. It could also be a point on one of the shapes, like A. 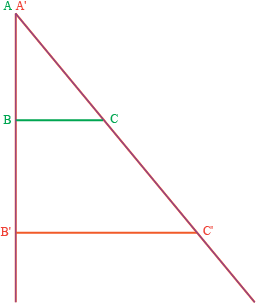 Or it could be located inside the shapes, like P. 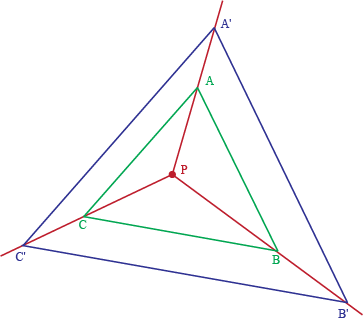 If the shapes are plotted on a coordinate grid, the center of dilation is usually the origin—though this isn't always the case. 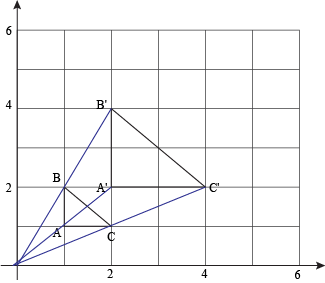 So is there a way to measure how much the size changed? Of course. This is still math, after all. The measurement of size change is called the scale factor. While it sounds like the measurement of the scaliness of a monster's skin (FYI, fish are around 2, while alligators are almost 9.), it's actually the number that you multiply the preimage's side length by to find the side lengths of the new image. 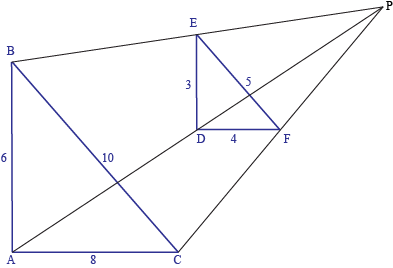 The scale factor used to dilate ∆ABC into ∆DEF is

. That is, you multiply each side of ∆ABC by

to get the side lengths of ∆DEF. More formal mathematicians, in addition to wearing tuxes while doing their calculations, would write "∆DEF is the image of ∆ABC under dilation about P of ratio

The scale factor shows up in another place, too. It gives us a comparison of how far each shape is from the center of dilation. 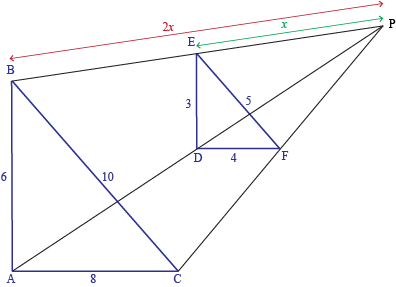 Luckily, we don't have to deal with two times the PDA. Because, yikes, that would be terrifying.

Remember how we said dilations could either enlarge or reduce a shape? Naturally, there's a numerical way to classify those changes.

Given that the green triangle is the preimage, identify the scale factor used in this dilation to draw the image of the orange triangle.

Notice that the distance from the center to the green triangle is 7, while the distance to the corresponding angle on the orange triangle is 21. That's three times bigger, so the scale factor is 3.

So how do we actually create our own dilation? So glad you asked. All you need is a shape, a center of dilation, and a scale factor. Let's try one.

Given ∆ABC, draw the image ∆A'B'C' under a dilation about P of ratio 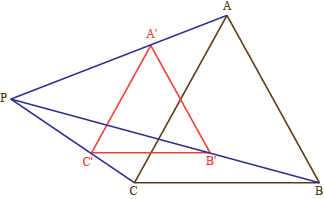 Start by connecting point P to each of the vertices of the triangle. Measure each length, and mark the point along each line segment that is

of the way from the point to the vertex. These newly marked points will be the vertices of the new image. Connect the dots and label them.

Given ∆DOG, draw the image ∆D'O'G' under a dilation about Y of ratio 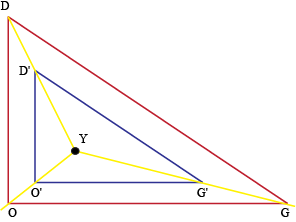 Our scale factor is less than 1, so we'll end up with a reduction. We'll connect the point Y with each of the vertices, mark half the distance of each, and connect those new points. Our new shrunken image, ∆D'O'G', will have sides half the length of the preimage's sides.

Shrinking dogs? What kind of monster are you?

If the scale factor is greater than 1, you'll need to extend those line segments beyond the vertices in the preimage. 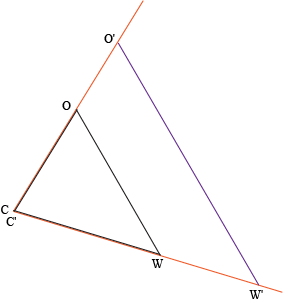 Since the center of dilation is one of the vertices, we'll start by extending the line segments that C is a part of. Next, mark a point on each of the segments that is twice the distance from C to the other vertex. Finally, label and connect them: ∆C'O'W'. Incidentally, do you know what the USDA calls the fanciest cut of beef? Cow, prime. 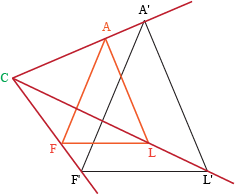 This scale factor is greater than 1, so we'll end up with an enlargement. Connect C with A, L, and F, extending each line segment beyond the vertices of the triangle. Mark a point on each line segment at the place that is equal to 1.5 times the distance from C to the vertex. Connect and label those points.

Just think. If we had started with quadrilateral CALF, we'd have ended up with CALF prime. We think that's called veal.

We've talked about what dilations do do (no poop jokes, please). But is there anything they don't do?

Yep. Dilation does not change any other characteristics of a shape, including:

Consider this dilation: P is the center of dilation, ABCD is our preimage, and A'B'C'D' is our image. 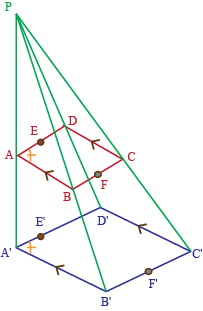 We still have the same angle measures (∠DAB ≅ ∠D'A'B'). And remember that it only takes two pairs of congruent angles to be sure that triangles are similar. Since the image has all angles congruent to the angles in the preimage, we can use the Angle-Angle Postulate to prove that dilation results in a similar triangle.

In the end, Dr. Frankenstein isn't wholly despicable. Even though he dilates his subjects, at least they don't end up disfigured.