Similar triangles, like all similar polygons, have congruent angles but proportional sides. This means, of course, that if we write ratios comparing their side lengths, the ratios will be equivalent. 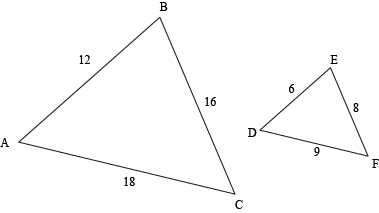 ∆ABC is similar to ∆DEF. Mathematicians, always trying to be more efficient and write things with as few characters as possible, would write ∆ABC ~ ∆DEF. Notice how the symbol for similar (~) is pretty close to the symbol for congruent (≅). Think of it like this: being congruent is kind of like being similar, only with a dose of equality mixed in.

One set of ratios we can write compares the sides of ∆ABC with the corresponding sides of ∆DEF.

We can also write ratios that compare the sides within each triangle. For example,