The unit circle sounds so techno—like moon unit or parental unit—but it's not. Really. It's just a simple little circle with a radius of 1. 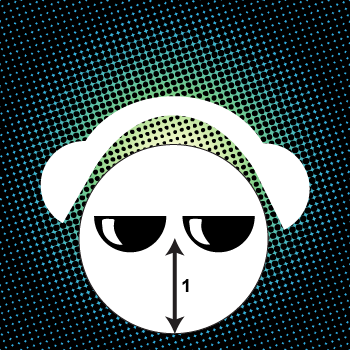 Here's what the unit circle looks like (we'll explain all those crazy-looking pieces in a minute): 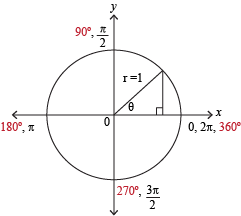 It's a useful unit, that's what. With it, we can learn more about trig functions and better understand reference triangles.

It will also lead us to the radian, another angle measurement. We'll have to re-boot our brains to look at life in radians (rather than degrees).

Angles can be measured in degrees or in radians. Here's the lowdown on the radian phenom.

Let's draw a circle with radius r. Then mark off an arc on our circle with length r, like so.

The central angle that subtends our arc is equal to 1 radian.

In other words, a half circle contains 180° or π radians. 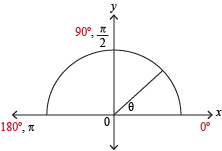 Since they both equal half a circle, they must equal each other.

We can use this conversion factor to convert from degrees to radians, or from radians to degrees.

So there…not so bad, right? Try out these problems for size.

Multiply by the conversion factor. Which one? The one that has the unit we need on top. (Try topping that.) That way, the unit you're getting rid of will be in the denominator and will cancel.

We want the degrees to cancel out, so we'll multiply by

. And since that's just a clever form of 1, we can multiply our angle by it without changing the angle.

There we go. It's the exact same angle, except it's in radian mode now.

Multiply by the conversion factor. Which one? The one that has the unit you need on top. That way, the unit you're getting rid of will be in the denominator and will cancel. (FYI— repeating stuff doesn't hurt, now does it?)

This time, we want the radians to cancel out. We'll multiply by