The building block of all theories of electricity is charge. Charge is a fundamental property of matter, just like mass. Like mass describes the interaction of matter and gravitational fields, charge describes the interaction of matter and electric fields. Mass leads to all of the concepts in mechanics, from forces to energy to momentum, while charge will lead the charge into all of the concepts in electromagnetism. (Pun intended. We apologize.)

Charge is denoted q and is measured in coulombs (C). The coulomb is the basic SI unit of electromagnetism, just like the kilogram is the basic unit of mass.

The interaction of positive and negative charges is given by Coulomb's Law. For two charges, q1 and q2, a distance r apart from each other, the force one exerts on the other (remember Newton's Third Law) is given by:

The k in this equation is a fundamental constant often called Coulomb's constant, equal to

.Note how similar this is to the equation for gravitational attraction between two masses:

. Both electric and gravitational forces are "r-squared" (sometimes called "inverse square") laws that describe the attractive or repulsive interactions of objects that do not touch. The interaction gets much, much larger as the objects get closer. 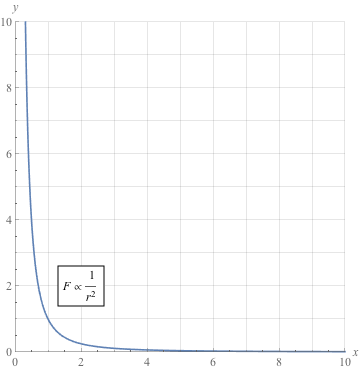 Two like charges (plus-plus or minus-minus) will yield a positive Fe; this is the sign that represents a repulsive force. Two opposite charges (plus-minus) will make Fe negative, which is an attractive force (hubba hubba). If we think of force as something that pushes, then it makes sense that a positive force would push the particles apart and a negative force would bring them together.

That's all well and good for two charges, but there are more than just two charges floating around in the universe. Darn. Never fear, however, because charge obeys the principle of superposition. Superposition is a mathematical tool that lets us ignore everything in a problem except for one item, solve the problem, and then keep chugging away—ignore everything but the next item, solve, ignore everything but the item after that, solve, and so on. Ignore all those extra charges like you would a yappy beagle outside your window. Go ahead. At the end, we add all the little solutions together and that's our net answer.

There are two directions at work in Coulomb forces. One is the sign that results from Coulomb's Law—whether the force is attractive or repulsive. But the other is what direction "attraction" or "repulsion" actually acts in, which is completely dependent on the geometry of the charge configuration. Attraction and repulsion will both always act along the line between the two charges, with attraction pulling them together and repulsion pushing them apart.

One of the most impressive ways to build up a huge chunk of static electricity, that thing your socks get in the dryer or that helps with bad hair days, is a van de Graaff generator.

*If you've heard of quarks, shush. They're never found outside of protons or neutrons anyway.