This is a lot like meeting identical twins who immediately get offended when you confuse them; however, even though the difference between "electric potential energy" and "electric potential" is etymologically small, they're totally different people and it's important not to confuse the two.

You can think of the electric potential of a charge as a measure of how hard it is to push another charged particle near it (because of Coulomb's Law, we know like charges are going to resist being close to each other). This is the amount of work you'd have to do to move a charged particle per unit of charge, and so it's measured in joules per coulomb, which is defined in SI units as a volt (V). The potential created by a charge q is given by:

We can combine these two formulas to get the potential energy a charge q1 possesses when it's moved to a distance r from charge q2: 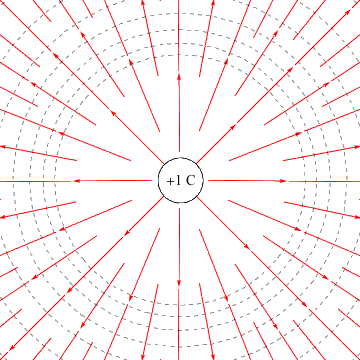 In fact, equipotential lines are easy to add to any field line diagram. They intersect field lines at a 90º angle—always—and are closer together where the field is stronger. 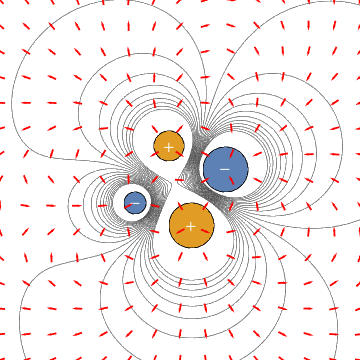 But gravity has a pretty intuitive place to put zero—namely, the ground. There are occasionally problems that are easier to solve by putting our zero potential point somewhere else, but nine out of ten dentists agree that the ground is a pretty good place to call h = 0 in the formula Ug = mgh.

goes to 0. This is a consistent definition with our formulas for force

approaches 0 as r → ∞) and electric field

Consistency is good. Not "we've won the lottery, gotten an A on our physics test, and found a lucky penny" kinds of good, but we'll still take it.

The formulas for Fe, E, V, and Ue all look very similar—an easy way to make sure you're using the right one is to check the units. Forces (Fe) are in N, electric fields (E) are in N/C, electric potentials (V) are in V or J/C, and electric potential energies are in J.

If you thought the platypus was impressive, well, it's not the only electric animal out there. Some fish, like the electric eel, are capable of creating huge potential differences on their bodies, which they can discharge to occasionally disastrous effect (500 V of hey-I'm-gonna-eat-you tends not to be too fun for that many other animals).