Archimedes and the Crown of Gold

Ever heard the expression Eureka? According to the Merriam-Webster dictionary, we use eureka to "express triumph on a discovery." It is derived from the Greek word heurēka (εὕρηκα), which means "I have found it!"

In the 3rd century BCE, there lived a great inventor, mathematician, and scientist named Archimedes. He was given the task of checking to see whether Goldsmith Crook (Mechanic Crook's ancestor) had mixed in silver while fabricating King Hiero II's gold crown. People knew Archimedes for his genius (he was a sharp fella), and apparently, people knew Goldsmith Crook for his unscrupulous methods. This means that King Hiero must have been awesome at picking up on dishonesty or simply living with an extreme sense of paranoia.

Anyway, gold has a very high density, the density of gold is

. It doesn't matter what shape gold is in, its density will always be

Archimedes decided that in order to determine whether the King's crown was made of pure gold, he would determine the crown's density.

How do we measure density again? Oh, yes, we remember this. Density equals mass divided by volume, or

. It's easy to determine an object's mass. The problem Archimedes had was figuring out the crown's volume. It's not like it was a cubic, cylinder, or any other regular solid.

*Now back to the story*

Archimedes thought really hard. Melting the crown into a sphere of gold to calculate its volume could work, but would ultimately destroy the crown. King Hiero urged Archimedes to find another way. Goldsmith Crook kept assuring the King the crown was made of pure gold. So what did Archimedes do? Like John Wayne a few centuries later, Archimedes took a bath.

Archimedes noticed the level of water rose while he stepped into his bath. It was precisely at this moment that he had an epiphany. The water level was the key.

The water level had risen by a very specific amount: an amount based on his body's own volume. Logically, then, a crown submerged in water would displace water by an amount equal to the crown's volume. In essence, he could find V.

Archimedes got so excited that he ran down the streets, naked, shouting, "Eureka! Eureka!" Looks like things were dealt with differently back then because he didn't get arrested.

And what happened to Goldsmith Crook? We don't know. We do know that he lived up to his name, Crook, however. The King's crown was not pure gold, but a mixture of gold and silver.

Archimedes' story illustrates a phenomenon known as buoyancy. Buoyancy is the ability to float.

If we drop a ping-pong ball into a bucket of water, the ball floats. If we drop a golf ball into the bucket, it sinks. What's the difference?

Weight is a force. The weight of displaced water pushing upward is known as Archimedes' Principle, which is illustrated in the following diagram. It's the very definition of the buoyant force. 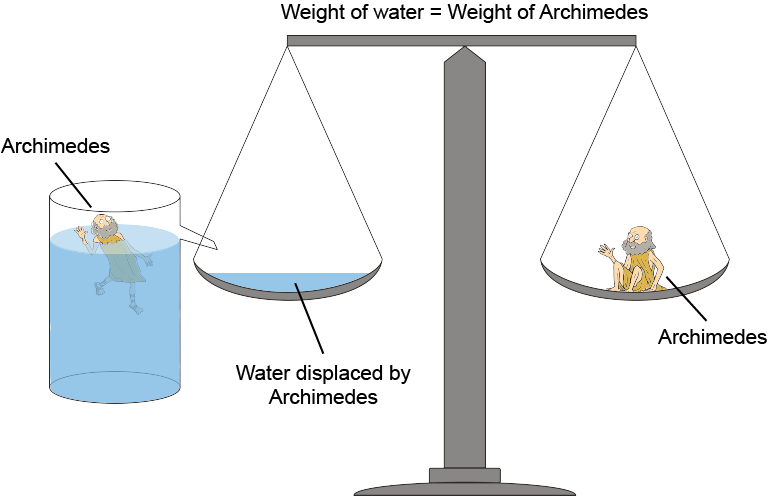 Objects seem to have different weights in various fluids because of the net difference between the force of gravity pulling down and the buoyant force pushing up . That's why we feel like we weigh less in a pool: the normal force our feet feel at the bottom of the pool is smaller than the normal force they feel on dry land. 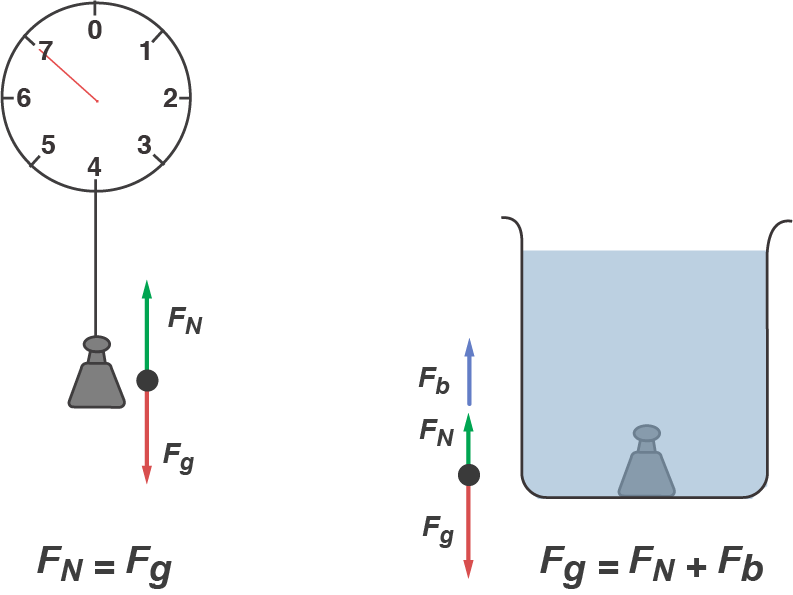 To rephrase the very same idea, note that the buoyant force is identical for any two objects of the same size. Density affects the force of gravity of the object itself but not the weight of displaced water. So density also determines whether the object floats or sinks, not the buoyant force.

Must all objects float or sink? Nope. They can just…hang. Literally.

An object in a fluid that doesn't sink all the way down, nor float at the surface, is said to be in equilibrium. If an object is in equilibrium, then the forces upon it are balanced: the force of gravity is equal to (and opposite in direction from) the buoyant force upon it.

Hydrostatic equilibrium refers to the state of an object that doesn't move while submerged in another fluid. In this case, the upward buoyant force Fb of a fluid is equal to its weight Fg while submerged in another fluid. For example, think of oil and water. Oil has a lower density than water, so it floats. The following diagram shows three cases of hydrostatic equilibrium with three balls of different densities. 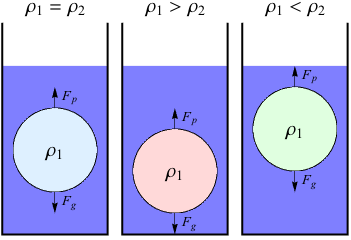 We are all familiar with situations where ρ1 > ρ2, like dropping an iPhone into the toilet. Situations where ρ1 < ρ2 are also common, such as a beach ball floating on water. When ρ1 = ρ2, an object or other fluid has the same density as its surrounding fluid. This is known as neutral buoyancy. 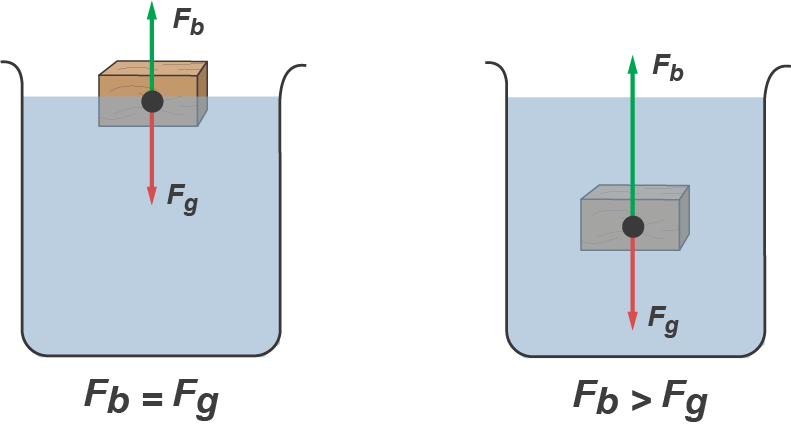 We'll learn how to calculate the volume of displaced water for a floating object (using force diagrams and density formulas) later on. Patience, patience.

A 2.7g ping pong ball floats on a bowl of water. How much water does it displace?

First step, let's gather information to see if we have enough to work with. Since the ping pong ball is not accelerating, we know that Fg = Fb, and we know how to calculate the size of that force with

The buoyant force is also 0.026 N because the two forces are balanced. What now? We know the density of water is

Anyone who's watched waterbugs on a pond before has an idea of what surface tension is.

These insects are actually called water striders. Since their density is greater than water's, the strider should sink. How do we explain this not-exactly-magical phenomenon?

Remembering Newton's Third Law, however, we know that for every force, there exists an equal and opposite force. The drop of water is no exception. Each force exerted by a molecule in a drop of water ends up canceling another force by another molecule in the drop, so these water molecules just float around…la di da…not tied to anything. Except for the molecules at the edges: the surface. 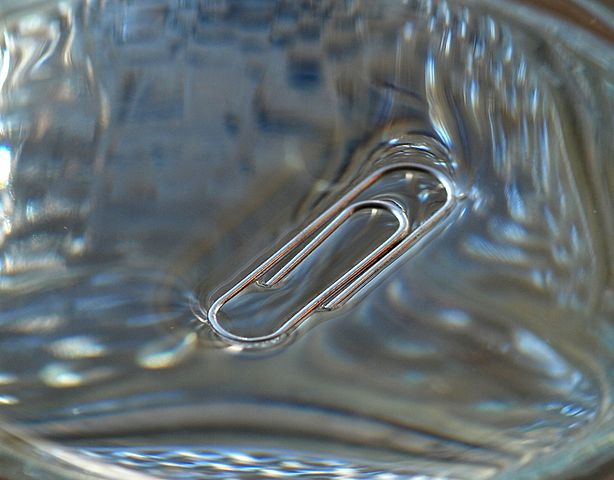 The water strider does the same thing: 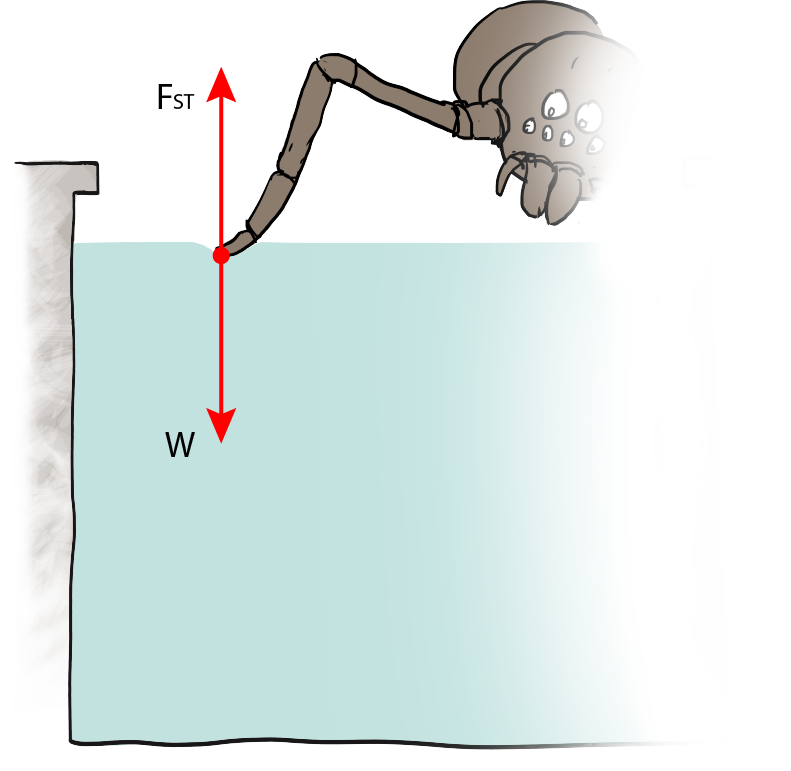 The force diagram for each foot of the water strider would include gravity downwards and surface tension upwards. The two balance each other. There's no buoyant force because no water is displaced, no part of the water strider is below the water's surface.
If the insect was larger and had a thicker leg, then FST would have to be larger to compensate for the extra mass added to the weight. That explains the size of water striders, and why we can't stride on water ourselves. Pity.

By definition, surface tension is force divided by a unit of length, so the SI unit is Newtons per meter

. To find the force, we multiply by the length in contact with the surface, the part of the leg touching the water in the case of the strider.

We think of volume as the entire space occupied by a 3D object, and the surface area as the boundary that defines the object's space. Visualize the surface area of a single drop of a fluid by picturing the object wrapped in a thin layer of plastic. If we peel off the plastic and stretch it out, we're left with a 2D surface.

Water bugs. Some have cup-shaped feet, which explain their seemingly unnatural buoyancy. Maybe if we had boat-feet we could walk or "stride" on water too. Aren't they cute?