Welcome to Physics, the science of objects’ interactions with other objects. We can’t begin the study of physics without first understanding the concept of motion. In physics, talk about motion is called kinematics. Don’t confuse this idea with cinematics, the study of motion pictures. Kinematics is the investigation of motion itself, no pictures needed.

And then there is force. Not the force, that’s another lesson young padawan. At the most basic level physics is the study of how objects interact with each other, forces—the cause of interactions among ALL objects—are the drivers of all things physics.

There we have it: kinematics studies objects’ motion, and force is the cause of that motion. 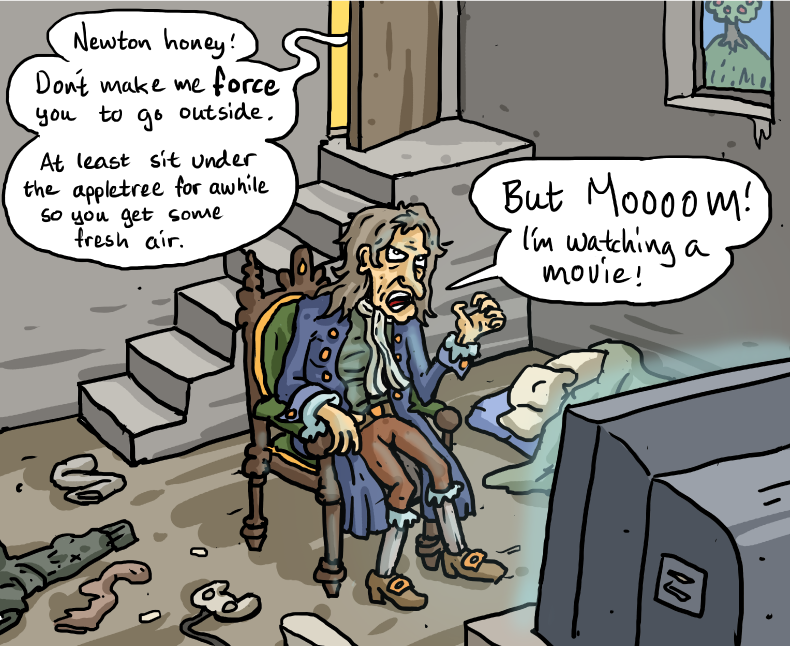 Without mastering kinematics, we can’t move. At all. We’ve already mastered motion on an experiential level, now let’s master it on a theoretical level. How do we catch a fly ball, cruise on a bicycle, or know the maximum we can lean back in our desk chairs before gravity takes over?

It’s time to talk about all that and more, via the motion of the necessaries in physics classes: apples, planets, orbits and cannonballs.

A Tale of Two Newtons
Who was Sir Isaac Newton? A brilliant physicist? A mysterious alchemist? Watch this PBS documentary shedding light on the darker side of the Guy in the (sometimes) Fancy Wig.

The Dark Side of Gravity
Neil deGrasse Tyson takes us half a mile underground into a spooky abandoned mine, where astrophysicists look for something even spookier: something invisible that dictates how entire galaxies move.

In Love with Gravity
Astronaut Howard Wolowitz desperately misses gravity while on a space mission in this short clip from Big Bang Theory.

Launch your Cannonball
Simulate projectile motion by varying projection angles, initial velocities, and even include air resistance if you wish.

Master of the Universe
Design your own planetary system, fling comets and put planets into orbit with this easy, cute game that lets you explore gravity. Not compatible with Google Chrome.

Masterminds of Gravitational Monsters
Read a New York Times article challenging both Albert Einstein and Stephen Hawking’s views of black holes, those massive collapsed stars from which not even light can escape.

Relatively Difficult Tests on Relativity
Peruse a PBS article describing general relativity and its various tests regarding the bending of light, including solar eclipses, orbits of Mercury, gravitational lensing, gravitational redshift, and even time dilation.